Timepieces are cool no matter how simplistic or granular they are. Sometimes its nice not to know exactly what time it is down to the second, and most of the really beautiful clocks are simple as can be. If you didn’t know this was a clock, it would still be fascinating to watch the bearings race around the face.

This clock takes design cues from the Story clock, a visual revolution in counting down time which uses magnetic levitation to move a single bearing around the face exactly once over a duration of any length as set by the user. As a clock, it’s not very useful, so there’s a digital readout that still doesn’t justify the $800 price tag.

[tomatoskins] designed a DIY version that’s far more elegant. It has two ball bearings that move around the surface against hidden magnets — an hour ball and a minute ball. Inside there’s a pair of 3D-printed ring gears that are each driven by a stepper motor and controlled with an Arduino Nano and a real-time clock module. The body is made of plywood reclaimed from a bed frame, and [tomatoskins] added a walnut veneer for timeless class.

In addition to the code, STLs, and CAD files that birthed the STLs, [tomatoskins] has a juicy 3D-printing tip to offer. The gears had to be printed in interlocked pieces, but these seams can be sealed with a solution of acetone and plastic from supports and failed prints.

If you dig minimalism but think this clock is a bit too vague to read, here’s a huge digital clock made from small analog clocks. 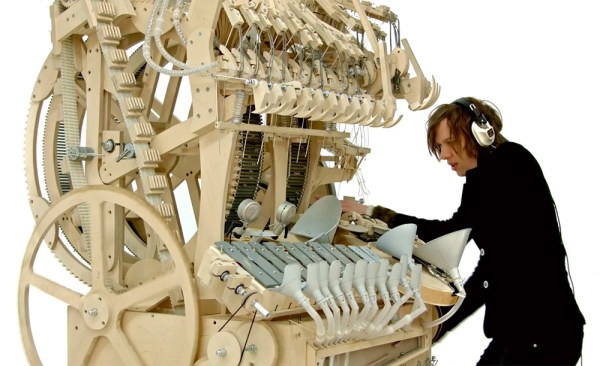 We tried to figure out how to describe the band [Wintergatan]. It took a lot of googling, and we decided to let their really incredible music machine do it for them. The best part? Unlike some projects like this that come our way, [Wintergatan] documented the whole build process in an eight part video series.

The core of the machine is a large drum with two tracks of alternating grey and black Lego Technic beams and pins. The musician sequences out the music using these. The pins activate levers which in turn drop ball bearings on the various sound producing devices in the machine. The melody is produced by a vibraphone. At first we thought the drum kit was electronic, but it turns out the wires going to it were to amplify the sound they made when hit. At the end of their travel the bearings are brought up to the hopper again by a bucket conveyor.

The final part count for the machine sits at 3,000 not including the 2,000 ball bearings rolling around inside of it. If you’ve ever tried to make a marble machine, then you’ll be just as impressed as we were that the machine only appeared to lose a few marbles in the course of a three minute song. Aside from the smoothness of the machine, which is impressive, we also enjoyed the pure, well, hackiness of it. We can spy regular wood screws, rubber bands, plywood, bits of wire, and all sorts of on-the-spot solutions. Just to add bonus cool, the whole project appears to have been built with  just a bandsaw, a drill press, and a few hand power tools.

The machine is great, but we also really appreciate the hacker spirit behind it. When a commenter on a YouTube video told him he was a genius, he replied, “Thank you for that! But I do think, though, that it is mostly about being able to put in the time! I mean the talent of being stubborn and able to see things through are more important than the abilities you have to start with. If you work hard on anything, you will learn what you need and success! Its my idea anyway! So happy people like the machine!”. Which we think is just as cool as the machine itself. Video of the machine in action and part one of the build series after the break!