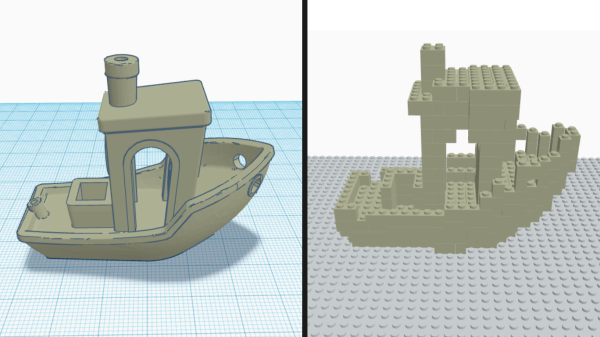 [Andrew Sink] made a brief video demonstrating how he imported an STL of the well-known 3D Benchy tugboat model, and instead of sending it to a 3D printer used the Brick Mode feature to make a physical copy out of LEGO bricks in an eye-aching kaleidoscope of colors.

For those of you who haven’t used Tinkercad lately, Brick Mode allows you to represent a model as LEGO bricks at various scales. You model something as usual (or import a model) and by pushing a single button, render it in LEGO as accurately as can be done with standard bricks.

In addition, [Andrew] shows how the “Layers” feature can be used as a makeshift assembly guide for the model, albeit with a couple of quirks that he explains in the video embedded below.