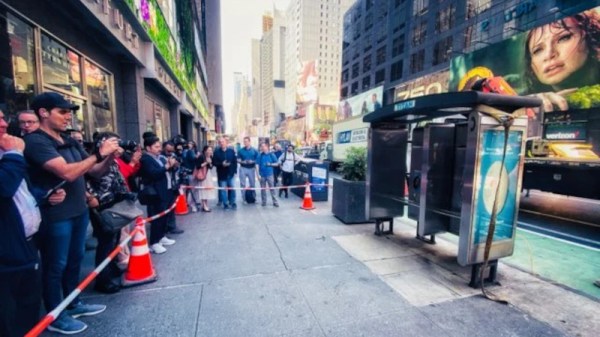 It was a melancholy Monday this week in the Big Apple as the last public payphone was uprooted from midtown Manhattan near Times Square and hauled away like so much garbage. That oughta be in a museum, you’re thinking, if you’re anything like us. Don’t worry; that’s exactly where the pair is headed.

This all started in 2014 when mayor de Blasio pledged to move the concept of street-level public utility into the future. Since then, NYC’s payphones have been systematically replaced with roughly 2,000 Link Wi-Fi kiosks that provide free domestic phone calls, device charging, and of course, Internet access. They also give weather, transit updates, and neighborhood news.

There are still a few private payphones around the city, so Superman still has places to change, and Bill and Ted can continue to come home. But if you need to make a phone call and have nowhere to turn, a Link kiosk is the way to go.

Although your Cap’n Crunch whistle hasn’t worked in decades, it’s still a sad day in history for the Jolly Wrencher, whose maiden message was about ye olde red boxen. We’re already seeing pay phones live on as art, so that’s a good sign.

Images via PIX11 and CBS News 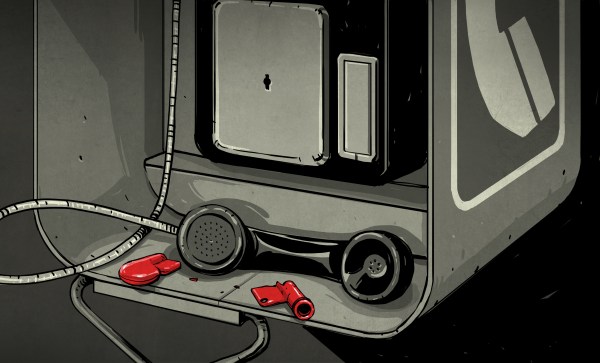 With hindsight, I picked the wrong day to 3D print a Cap’n Crunch whistle downloaded from Thingiverse. I was covering the hackspace textile evening, so I set the Ultimaker going and headed off to spend my evening making a laptop pouch. My whistle, a reasonable reproduction of the famous cereal packet novelty whose 2600 Hz tone allowed special access to American telephone networks, was ready for me to take away as I headed home.

The next day, there it was. The legendary phreaker [John Draper], also known as [Captain Crunch] after his use of that free whistle, was exposed as having a history of inappropriate conduct towards teenage boys and young men who he encountered in his tours of the hacker community as a celebrity speaker.

My whistle will no longer go on a lanyard as a piece of cool ephemera, it’s sitting forlornly on my bench. The constant procession of harassment allegations that have been in the news of late have arrived at our doorstep. END_OF_DOCUMENT_TOKEN_TO_BE_REPLACED

[Federico Musto], one of the Arduinos in the Arduino vs. Arduino saga (which finally came to an end last September) may have fabricated his academic record. This news comes from Wired, providing documents from the registrars at MIT and NYU stating [Musto] never attended these institutions. Since this story came out, [Musto] has edited his LinkedIn, listing his only academic credential as a kindergarten in Torino, Italy.

This is a hackers bar. This bar in Roppongi, Tokyo is, “a place where you can enjoy live programming and business making…. The term ‘hacker’ is applied to someone who possesses top skills and knowledge to provide innovative and quick solutions even to the most difficult tasks.” It appears they have daily events/talks for JavaScript, Python, R, and Swift.

Captain Crunch needs our help. He’s facing some serious surgery, and even if it’s successful, there’s going to be a lot of stuff insurance doesn’t cover.

We can use Libreboot again. A few months ago, the Libreboot project left the GNU project after an issue with an employee at the Free Software Foundation. Hackaday chose not to report on this only because the accusations levied against the FSF were hearsay. I should emphasize this: the only reason we chose not to report on this is because the accusations were hearsay. Now the Libreboot project is under more democratic management and they’re working on the Thinkpad X220, the greatest Thinkpad of all time. Neat.

Here’s a quick and easy tip to get metal fume fever. Build a foundry out of a galvanized trash can! No, don’t worry about that galvanized coating, it’ll burn off. Oh, he’s doing this indoors. What’s carbon monoxide? Why am I sleepy?