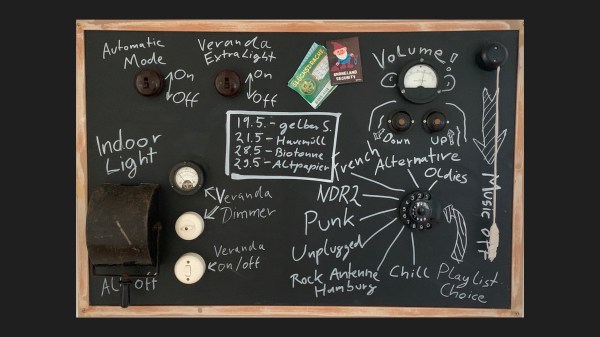 Responding to the Rethink Displays challenge of the 2021 Hackaday Prize contest, freelance design engineer [Rick Pannen] brings a retro look to his DIY home automation controller. You could be forgiven for not even realizing it is a controller at first glance. [Rick] built this using a magnetic chalk board and installed all the control electronics on the back. The main processor is a Raspberry Pi 400 running Raspian with IOBroker and Node-Red. Panel lettering and graphics are done free-hand with, you guessed it, chalk.

The controls on this panel are an eclectic hodgepodge of meters, switches, and sensors that [Rick] scored on eBay or scavenged from friends. We are curious about the simple-looking rotary dial that sends a pulse train based on the number set on the dial — this seems to have all the functionality of an old phone’s rotary dial without any of the fun.

But [Rick]’s design allows for easy changes — dare we say, it encourages them — so maybe we’ll see a salvaged rotary dial added in future revisions. Also note the indoor lighting ON/OFF switch that must be a real joy to operate. We wonder, is there any way the controls could be magnetized and moved freely around the board without permanently attaching them? Maybe an idea for version 4 or 5.

This design has a lot of possibilities, and we look forward to any upgrades or derivative versions of this unique home automation controller. Let us know in the comments below if you have any suggestions for expanding upon this idea. 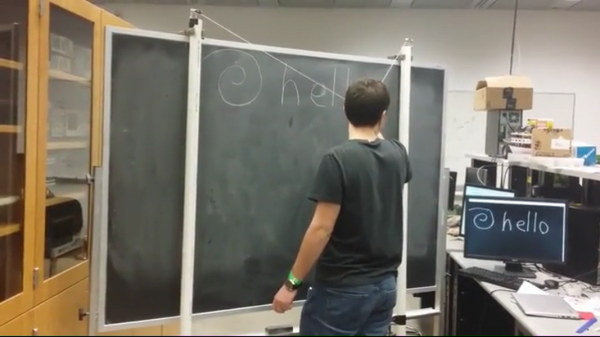 Digital White/Black Boards or “Smart Boards” are very useful in modern classrooms, but their high cost often makes it difficult to convince administrators from loosening their purse strings. Cooper Union’s 2nd annual HackCooper event in New York wanted students to design and build hardware and software projects that both solve real problems and spark the imagination. At the 24 hour hackathon, the team of [harrison], [david] and [caleb] decided to put together a low-cost and simple solution to digitizing classroom black board content.

A chalk-holder is attached to two strings, each connected over a pulley to a weight. The weights slide inside PVC pipes at the two sides of the black board. Ultrasonic sensors at the bottom of each tube measure the distance to the weights. The weights sit in static equilibrium, so they serve the purpose of keeping the string taut without negatively interfering with the writer.

With a couple of calibration points to measure the extent of displacement of each weight, board width can be determined, making it easy to adapt to different sizes of boards. Once calibrated, the system can determine position of the chalk over the board based on some trigonometrical calculations. Since they had just 24 hours to hack the system together, they had to use a hand operated radio with a couple of buttons to provide user control. Pressing the “Write” button starts transmitting chalk movements to the digital screen. A second button on the radio remote serves to “Erase” the digital screen. After receiving the chalk position data, they had to do a fair amount of processing to eliminate noise and smooth out the writing on the digital screen.

A server allows the whole class to receive the chalk board data in real time. After each “Erase” command, the chalk board state is saved and logged on the server, thus allowing previous content to be viewed or downloaded. If only text is written, optical character recognition can be used to further digitize the content.

What makes the project really useful is the low cost. The sensors cost a dollar. The other parts – PVC pipe, weights/pulleys, Arduino and the Radio key fob – were all bought for under 40 dollars. For some additional cost (and maybe more time in their case) they could have automated the detection of when the chalk was actually doing the writing. The team have made their code available on Github. For a Chalk board at the other end of the cost spectrum, check this one out. Video below.