Resin printing, it can be messy but you get really great resolution thanks to the optical nature of curing the sticky goo with light from a projector. Soon it will have a few more notches in its belt to lord over its deposition cousins: speed and lack of layers. A breakthrough in resin printing makes it much faster than ever before and pretty much eliminates layering from the printed structure.

The concept uses an oxygen-permeable layer at the bottom of the resin pool. This inhibits curing, and apparently is the source of the breakthrough. The resin is cured right on the border of this layer and allows for what is described as a continuous growth process rather than a layer-based approach. One of the benefits described is no need for resin to flow in as the part is extracted but we’re skeptical on that claim (the resin still needs to flow from somewhere). Still, for us the need to work with resin which is expensive, possibly messy, and has an expiry (at least when compared to plastic filament) has kept deposition as a contender. The speed increase and claims of strength benefits over layer-based techniques just might be that killer feature.

The technology is coming from a company called Carbon3D. They are branding it CLIP, or Continuous Liquid Interface Production. After the break you can see a video illustration of the concept (which is a bit too simple for our tastes) as well as a TED talk which the company’s CEO, [Joseph Desimone] gave this month. Of course there is also the obligatory time-lapse print demo.

So what do you think: game changer or not, and why do you feel that way? Let us know in the comments.

END_OF_DOCUMENT_TOKEN_TO_BE_REPLACED 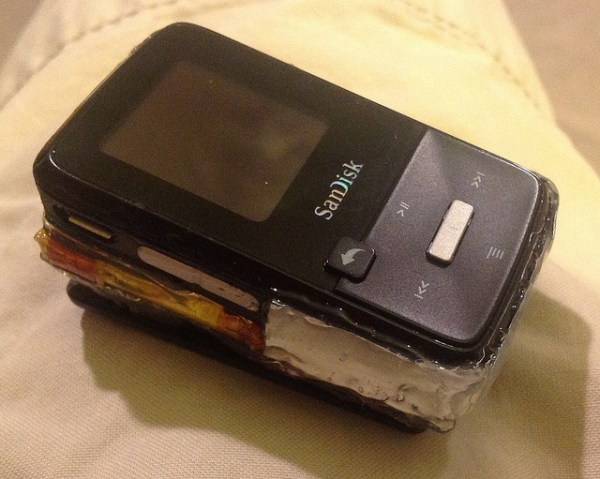 [Pyra] was looking for a way to reprogram some ATtiny13 microcontrollers in a SOIC package. He’s re-engineering some consumer electronics so adding an ISP header to the design isn’t an option. He had been soldering wires to the legs of every chip but this is quite tedious. What he needs is an adapter that can make physical contact with the legs just long enough to program new firmware. After looking around he discovered that a PCI socket can be used as a progamming clip (translated). It shares the same pitch as a standard SOIC package but is not wide enough for the chip. He cut out 4 rows of the socket and the section of motherboard it was soldered to. Then he made a cut down the middle of the plastic and bent the two sections apart. The image above illustrates this, but not shown are the eight wires that he later added to connect to the device.

We wonder if this can be adapted to program SOIC parts without removing them from a circuit board. That would be a handy tool for finishing up the LED lightbulb hack.