We can commiserate with [HardwareCoder] who would rather not leave his PC speakers on all the time. The Creative T20 set that he uses turn off when you turn the volume knob all the way down until it clicks. So shutting them off means repositioning the volume each time they’re switched on again. This hack kills two birds with one stone by turning on and off automatically without touching that knob.

The system is based around an ATtiny45 and a few other simple components. It uses two ADCs to monitor the rear input channels of the PC speakers. If no sound is detected for more than one minute, the shutdown pin of the speakers’ amp chip is triggered. That’s not quite where the hack ends. We mentioned it monitors the rear input of the speakers, but it doesn’t monitor the front AUX input. An additional push button is used to disable the auto-sleep when using this front input. There is also a fancy PWM-based heartbeat on an LED when the speakers are sleeping.

[HardwareCoder] was worried that we wouldn’t be interested in this since it’s quite similar to a hack we ran a few years ago. We hope you’ll agree it’s worth another look. He also warned us that the demo video was boring. We watched it all anyway and can confirm that there’s not much action there but we embedded it below anyway.

END_OF_DOCUMENT_TOKEN_TO_BE_REPLACED

I am excited to announce Hackaday’s first ever event in India. We have a huge readership in the country and because I am based in Mumbai there is an opportunity to organize some events. On this Saturday, March 21st, at Maker’s Asylum hackerspace we will gather for “Bring-A-Hack Maker’s Asylum” to talk about our passion for making and hacking. We’ll discuss the 2015 Hackaday Prize which offers $500,000 in prizes for hackers who can build solutions to problems faced by a wide-range of people. What does that really mean? That’s one of the topics of the evening. Of course there will be plenty of time to show off your own hacks, ask for advice on difficult projects, and to socialize with everyone that attends. Please visit the event page for all the details.

For all of you who aren’t in the area, I’d like to share with you a little background about hackerspaces in India.

Hack : “To use something in a way it was not originally intended”. This could sound very familiar when you say that “Hack is the English equivalent of Hindi-Urdu word Jugaad“. So Hacking has a very positive and useful connotation when used in such a context. Everybody does it some time or the other – sometimes unknowingly, but quite often on purpose. It follows that people who Hack be called Hackers – and again, that description is used in a very positive sense.

Sometime around the turn of the 21st century, individual Hackers who up until then used to work in isolation, started congregating together to form clubs and community spaces which came be called – no points for guessing – Hacker Spaces. The movement spread over Europe rapidly and then on to the United States, and slowly to other parts of the world. Hacker Spaces became the breeding grounds for individual innovation. People with bright ideas would seek guidance and peer reviews of their hacks, and if it was interesting enough for the wider community, they would launch themselves as enterprising startups. Hacker Spaces provided the environment, the tools, and a community for people to tinker away and build stuff. In a sense, it is like going back to our enterprising roots before the advent of wide spread industrialization stifled individual entrepreneurship.

Rise of our Hackerspace Culture

Around 2008, when my interest in hacking got revived, I could not find a single Hacker Space in India. It wasn’t until late 2013 that I found another hacker with similar interests who wanted to set up a Hacker Space. When [Vaibhav Chabbra] met me in Ahmedabad during Maker Fest and mentioned that he had set up such a space in Mumbai, I immediately jumped in to help him out. Thus was born Makers’ Asylum. Since then, within a span of just 1 1/2 years, Hacker Spaces have sprung up in Ahmedabad, Surat, Pune, Bangalore, Hyderabad, Chennai, New Delhi, Meerut, and I am sure we will hear about more of them soon in other Cities. The Hacker movement is very much here, and here to stay and grow.

Resin printing, it can be messy but you get really great resolution thanks to the optical nature of curing the sticky goo with light from a projector. Soon it will have a few more notches in its belt to lord over its deposition cousins: speed and lack of layers. A breakthrough in resin printing makes it much faster than ever before and pretty much eliminates layering from the printed structure.

The concept uses an oxygen-permeable layer at the bottom of the resin pool. This inhibits curing, and apparently is the source of the breakthrough. The resin is cured right on the border of this layer and allows for what is described as a continuous growth process rather than a layer-based approach. One of the benefits described is no need for resin to flow in as the part is extracted but we’re skeptical on that claim (the resin still needs to flow from somewhere). Still, for us the need to work with resin which is expensive, possibly messy, and has an expiry (at least when compared to plastic filament) has kept deposition as a contender. The speed increase and claims of strength benefits over layer-based techniques just might be that killer feature.

The technology is coming from a company called Carbon3D. They are branding it CLIP, or Continuous Liquid Interface Production. After the break you can see a video illustration of the concept (which is a bit too simple for our tastes) as well as a TED talk which the company’s CEO, [Joseph Desimone] gave this month. Of course there is also the obligatory time-lapse print demo.

So what do you think: game changer or not, and why do you feel that way? Let us know in the comments.

END_OF_DOCUMENT_TOKEN_TO_BE_REPLACED 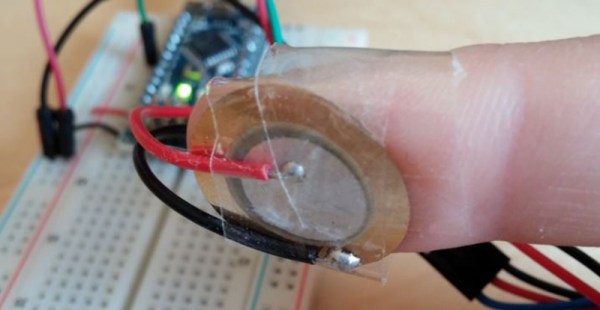 Look around for heart rate sensors that interface easily to microcontrollers, and you’ll come up with a few projects that use LEDs and other microcontrollers to do the dirty work of filtering out pulses in a wash of light.

[Thomas] was working on a project that detects if water is flowing through a pipe with a few piezoelectric sensors. Out of curiosity, he taped the sensor to his finger, and to everyone’s surprise, the values his microcontroller were spitting out were an extremely noise-free version of his heart rate.

The piezo in question is a standard, off the shelf module, and adding this to a microcontroller is as easy as putting the piezo on an analog pin. From there, it’s just averaging measurements and extracting a heartbeat from the data.

A while ago, [Gord] received a notice from his daughter’s school looking for silent auction donations for a fundraiser. It’s pretty much a bake sale, only [Gord] gets to build something. He has a pretty nice machine shop, and eventually settled on building a pair of beautiful vacillating vertical pendulums. They’re yo-yos, in case you were wondering what that meant.

Each half is cut out of a 2.5″, with both sides of each half faced off and tapped. From there, eighteen speed holes shave off 22 grams of weight. The sides of the yo-yo are shaved down to a thickness of half an inch, a 14° bevel is put on each face, the edges are chamfered at 30°, and everything is polished up.

Sending a bare metal yo-yo to a raffle is apparently a little uncouth, so [Gord] anodized each half of the yo-yos in a bath of sulfuric acid, then applied dye to the surface. With everything assembled, a fancy glass and metal case was constructed and a certificate of authenticity printed out. It’s a brilliant final touch to a great project, we just wish we knew how the yo-yo performed.

Thanks [Chris] for sending this in. 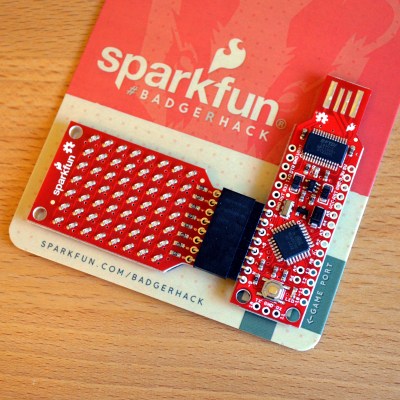 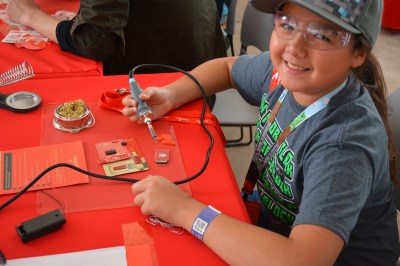 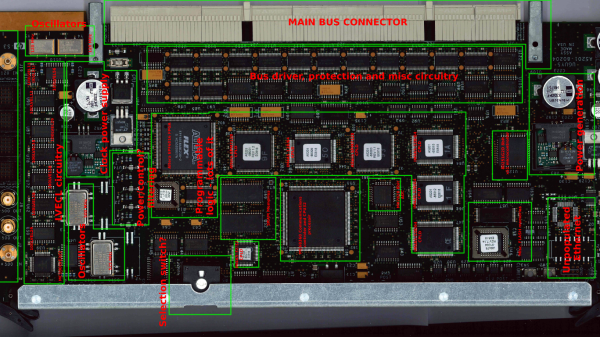 As interesting as it is to look at the insides of de-capped chips, it is equally interesting to sometimes look at old circuit boards and try to figure out the various sections, their functions, and to look at some of the design practices used. At a local electronics flea market, [daqq] recently chanced upon quite a large PCB that seemed to have come from some HP system, and picked it up for about €6 – the value of the abundant oscillators, crystals, connectors and other miscellaneous components that could be recovered seemed much more than what he paid for the board.

The board in question turned out to be from a HP 9000 Superdome system – part of the PA-8xxx based server series which packs quite a punch. This particular one was the 500MHz system UGUY5-500 board. At this point, most of [daqq]’s analysis is based on what he can visually decipher looking at the chip numbers and associated parts. He’s taken a stab at guessing the function of the board itself, and of the various parts on it. He’s put up high resolution scanned images of the board, for any of our readers who would like to offer an insight in to this board or the system that it was part of. Apparently, he has quite a few more exotic server PCB’s lined up for sleuthing, if you folks enjoy this.