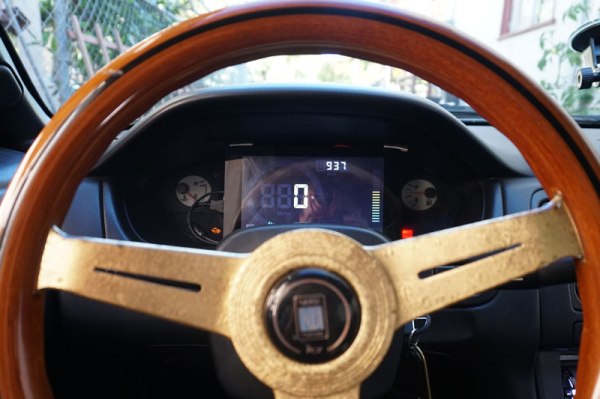 Looking for a way to make your older car more hi-tech? Why not add a fancy digital display? This hack from [Greg Matthews] does just that, using a Raspberry Pi, a  Consult reader and an LCD screen to create a digital dash that can run alongside (or in front of ) your old-school analog dials.

[Greg’s] hack uses a Raspberry Pi Foundation display, which includes a touch screen, so you don’t need a mouse or other controls. Node.js displays the speed, RPM, and engine temperature (check engine lights and other warnings are planned additions) through a webpage displayed using Chromium. The Node page is pulling info from another program on the Pi which monitors the Consult bus. It would be interesting to adapt this to use with more futuristic displays, maybe something like a pico projector and a 1-way mirror for a heads-up display.

To power the system [Greg] is using a Mausberry power supply which draws power from your car battery, but which also cleanly shuts down the Pi when the ignition is turned off so it won’t drain your battery. When you throw in an eBay sourced Consult reader and the Consult Dash software that [Greg] wrote to interpret and display the data from the  Consult bus, you get a decent digital dash display. Sure, it isn’t a Tesla touchscreen, but at $170, it’s a lot cheaper. Spend more and you can easily move that 60″ from your livingroom out to your hoopty and still use a Raspberry Pi.

What kind of extras would you build into this system? Gamification of your speed? Long-term fuel averaging? Let us know in the comments.

UPDATE – This post originally listed this hack as working from the OBD-II bus. However, this car does not have OBD-II, but instead uses Consult, an older data bus used by Nissan. Apologies for any confusion!