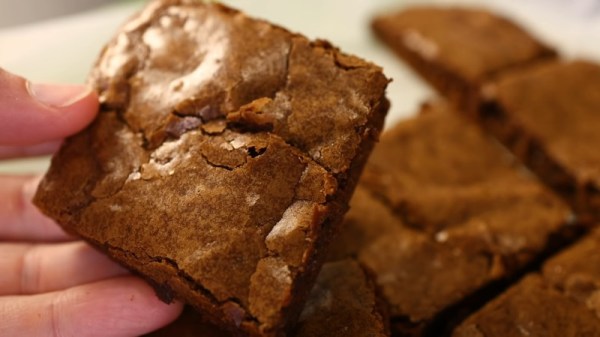 If you’re anything at all like this writer, you don’t spend a lot of time inspecting brownies past the initial object identification phase, preferring to insert them directly into the mouth post-haste. But those with more of an aesthetic focus take great care to produce brownies with a glossy, attractive skin. [Adam Ragusea] decided to find out what it takes to get a perfect brownie skin, time after time.

After many, many trays of brownies, [Adam], with the assistance of [Dr. Pia Sörensen], determined that the key seems to be making a brownie mixture with very finely dissolved sugar, in sucrose form, with a carefully controlled amount of water in the mixture. This produces a thick mixture which can hold together against the gases bubbling out during the cooking process, and produces a nice glossy skin. Too much water, and the mixture isn’t viscous enough to hold up, leading to brownies full of pock marks, while alternative sugars like fructose and glucose likely disrupt the ordered structure of sucrose molecules necessary for a shiny surface.

Together, [Adam] and [Pia] do a great job of exploring the molecular chemistry behind the process, as well as ruling out several myths that have been perpetuated in the viciously insular brownie subculture. All they’re missing is a set of standardised reflectivity tests executed with an Arduino and some photodiodes, but we’ll assume that was just cut for time. We’ve seen other hacks in the realm of molecular gastronomy before, like this homebrew kitchen centrifuge. Video after the break.

END_OF_DOCUMENT_TOKEN_TO_BE_REPLACED

After multiple iterations [Keef] has nailed down the fabrication process for an unusual component. Using only a heater water bath, some silicone and easily available reagents, [Keef] demonstrate how he manufactures a gastronomic enigma: the long egg.

The similarities between [Keef’s] process and the typical hacker iteration cycle are eggceptional. He starts out with a goal and iterates, modifying his methods until he gets the perfect long egg. Sound familiar? Cooking can be as much of a science as it is an art.

In his quest, [Keef] utilizes sausage casing, plastic bags, sticky tape, “lots of sweat and almost some tears” to hold eggs for cooking via an Anova Precision Cooker immersion circulator. However, [Keef] notes, the Anova is normally used for sous vide cooking so you might not have one sitting around. In that case, you can use a regular pan on a stovetop along with a digital thermometer, but you’ll have to be quite vigilant to keep the temperature steady.

But wait. Why would one want a long egg in the first place? I’ll leave this explanation to [Keef]. “Well, the main use is in a Gala Pie (a long pork pie baked in a loaf tin and often cut into slices for picnics). Or you could just slice the egg and lay it out on a platter and amaze your friends with how every slice is exactly the same size.”

Go check out [Keef’s] two videos. He has two, one that chronicles the eggciting initial attempts, and another that describes his final method. With [Keef’s] help, the number of long eggs outside of Denmark may substantially increase. But, if you’d rather have some pizza, we won’t be offended.