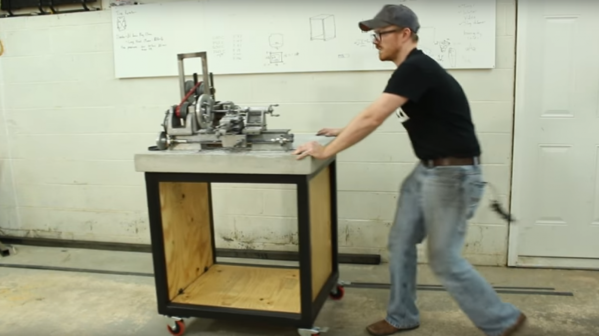 When it comes to machine tools, a good rule of thumb is that heavier is better. A big South Bend lathe or Bridgeport mill might tip the scales at ludicrous weight, but all that mass goes to damping vibration and improving performance. So you’d figure a lathe made of soda cans could use all the help it could get; this cast concrete machine cart ought to fit the bill nicely

Perhaps you’ve caught our recent coverage of [Makercise]’s long and detailed vlog of his Gingery lathe build. If not, you might want to watch the 5-minute condensed video of the build, which shows the entire process from melting down scrap aluminum for castings to first chips. We love the build and the videos, but the lightweight lathe on that wooden bench never really worked for us, or for [Makercise], who notes that he was never able to crank the lathe up to full speed because of the vibrations. The cart attempts to fix that problem the old fashioned way – more mass.

There are a few “measure twice, cut once” moments in the video below, as well as a high pucker-factor slab lift that could have turned into a real disaster. We might have opted for a countertop-grade concrete mix that could be dyed and polished, but that would be just for looks. When all is said and done, the cart does exactly what it was built to do, and there’s even room on it for the shaper that’s next on the build list. We’re looking forward to that.

END_OF_DOCUMENT_TOKEN_TO_BE_REPLACED

Who is [John Goodenough]? He’s 94, so he’s been around long enough that you ought to know him. He was one of the co-inventors of the lithium-ion battery. Think about how much that battery has changed electronics. [Goodenough] along with [Maria Helena Braga] may have come up with that battery’s successor: the solid state battery. There’s a paper available that is free, but requires registration. If you don’t want to register, you can read the news release from the University of Texas with no trouble.

Keywords used to describe the new battery are low-cost, noncombustible, long cycle life, high energy density, and fast charge and discharge rates. The pair is also claiming three times the energy density of a current lithium-ion battery. They also claim that the batteries recharge in minutes instead of hours. You can see a video from [Transport Evolved] that discusses the invention, below.

END_OF_DOCUMENT_TOKEN_TO_BE_REPLACED

Statistically, more celebrities died in 2016 than would be expected. 2017 is turning out to be a little better, but we did recently lose the great [Bill Paxton]. Game over, man. Game over. A few years ago, [Benheck] built his own pinball machine. It’s Bill Paxton Pinball. A great build, and worth revisiting, just like another viewing of Aliens and Apollo 13.

Some of the most popular 3D-printable objects are [flowalistik]’s low-poly Pokemon series. They’re great models, even though he missed the most obvious Pokemon. Of [flowalistik]’s low-poly Pokemon models, the Bulbasaur is a crowd favorite. Because this model is constructed from flat planes joined at an angle, it’s possible to make a huge low-poly Bulbasaur on a laser cutter or a CNC router. Go home Bulbasaur, you’re drunk. We are eagerly awaiting details on how this grass and poison-type tank was made.

For the last few months, [Matthew Cremona] has been building a huge bandsaw mill in his backyard. It’s built for cutting logs into lumber, and this thing is massive. He’s been posting build log videos for the last few months, but this week he’s finally gotten to where we want him to be: he’s cutting gigantic logs. In the coming weeks, he’s going to be cutting a maple crotch that’s 60 inches (1.5 meters) across.

What happens when you give away a new Raspberry Pi Zero W to the fifth caller? This. In other news, Adafruit somehow acquired a real New York City payphone. I’ve heard they were replacing these with WiFi hotspots, which means there are a ton of payphones in a warehouse somewhere? Can anyone hook us up?

END_OF_DOCUMENT_TOKEN_TO_BE_REPLACED

When you already know exactly where and how you’d like your motor to behave, a code-compile-flash-run-debug cycle can work just fine. But if you want to play around with a stepper motor, there’s nothing like a live interface. [BrendaEM]’s RDL is a generic stepper motor driver environment that you can flash into an Arduino. RDL talks to your computer or cell phone over serial, and can command a stepper-driver IC to move the motor in three modes: rotary, divisions of a circle, and linear. (Hence the acronumical name.) Best of all, the entire system is interactive. Have a peek at the video below.

The software has quite a range of capabilities. Typing “?” gets you a list of commands, typing “@” tells you where the motor thinks it is, and “h” moves the motor back to its home position. Rotating by turns, degrees, or to a particular position are simple. It can also read from an analog joystick, which will control the rotation speed forward and backward in real time.

Division mode carves the pie up into a number of slices, and the motor spins to these particular locations. Twelve, or sixty, divisions gives you a clock, for instance. Acceleration and deceleration profiles are built in, but tweakable. You can change microstepping on the fly, and tweak many parameters of the drive, and then save all of the results to EEPROM. If you’re playing around with a new motor, and don’t know how quickly it can accelerate, or what speeds it’s capable of, nothing beats playing around with it interactively.

END_OF_DOCUMENT_TOKEN_TO_BE_REPLACED

In order to get the most out of the batteries connected to your microcontroller, you’ll probably need to put it to sleep, the deeper the better. [Rgrokett] was curious about the nighttime habits of his cat, and came up with a nice little hack to get more battery life out of the ESP8266 that he was using.

[rgrokett]’s cat enters and leaves through a cat-door. He figured a PIR sensor would let him know when there was movement around the door. He could then tell if the cat was around. Leaving the PIR sensor and the ESP8266 microcontroller (an Adafruit Huzzah) on all the time drained the batteries pretty quickly, so [rgrokett] decided to try putting the Huzzah to sleep.

The trick in this build is that the PIR sensor is used to reset the Huzzah when it triggers. The Huzzah requires the reset switch to go from high to low, but the PIR trigger goes from low to high, so a transistor is used to invert the PIR sensor’s trigger signal. When the Huzzah wakes up, it connects to the WiFi network and sends [rgrokett] an email via IFTTT ([rgrokett]’s description goes over the steps to set up a secure connection to IFTTT.)

It’s a pretty simple hack, but it increases [rgrokett] system’s battery life from a couple of days to more than a month (he’s still waiting to see how long they’ll last) and all that was needed was the microcontroller, the sensor and a couple of parts. We have a couple of older hacks about putting the ESP modules into deep sleep, such as this one, and check out this tutorial on PIR sensors. 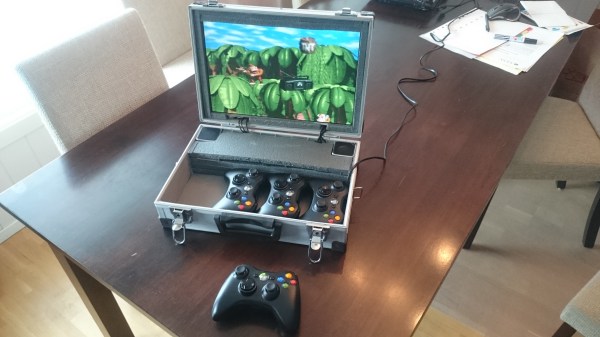 Portable gaming — and gaming in general —  has come a long way since the days of the original Game Boy. With a mind towards portable multiplayer games, Redditor [dagcon] has assembled a RetroPie inside a suitcase — screen and all!

This portable console has almost everything you could need. Four controllers are nestled beside two speakers. Much of the power cabling is separated and contained by  foam inserts. The screen fits snugly into the lid with a sheet of rubber foam to protect it during transport.

Tucked behind the monitor rests the brains of this suitcase console: a Raspberry Pi and the associated boards. [Dagcon] resorted to using a dedicated sound card for the speakers, diverting the output from the HDMI port. An LCD screen controller was also necessary as the screen had been re-purposed from its previous life as a laptop screen. [Dagcon] offers some tips on how to go about accomplishing this yourself and a helpful Instructables link.