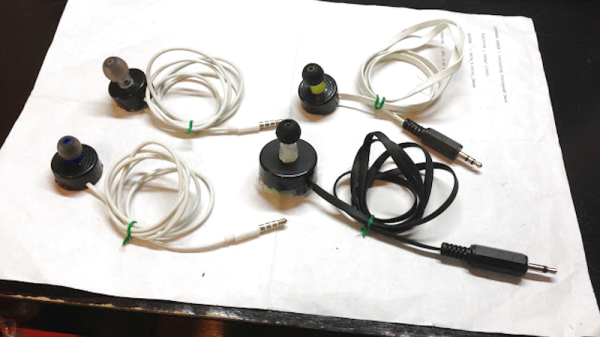 Crystal radios can feel magical, given their ability to tune in audio from distant stations with nothing but the energy from the radio signal itself. However, to achieve this feat, they typically rely on a high-impedance earphone to produce an audible sound with very little current. These earphones are hard to find, and thus can be expensive. However, [Billy] figured out a way to build them on the cheap.

The build starts with a common piezoelectric buzzer. It’s torn down and the extraneous circuitry inside is removed. The piezo element itself is then directly hooked up to a mono audio jack for use with one of [Billy’s] crystal radios. To make it into a usable earpiece, the tip of a pen is cut off and glued to the buzzer’s plastic housing. Then, a rubber in-ear cup from regular modern earbuds is used to ensure a tight, comfortable fit in the ear.

It’s a great way to build something that’s now hard to source, and we bet that [Billy’s] design is more comfortable than the hard plastic models that shipped in Radio Shack kits in the 90s. Of course, there’s other ways to build high-impedance drivers, as we’ve featured before. And, if you’re looking to build a crystal radio, it’s hard to go past [Billy’s] credit card chip build. Video after the break.

END_OF_DOCUMENT_TOKEN_TO_BE_REPLACED

Back in the 1960s, these were fairly common in cheap transistor radios and hearing aids. Their sound fidelity isn’t very good, but they are very sensitive and have a fairly high impedance, and that’s why they are good for crystal radios.

[Steve1001] had a few of these inexpensive earpieces that either didn’t work or had low sound output. He found the root cause was usually a simple problem and shares how to fix them without much trouble.