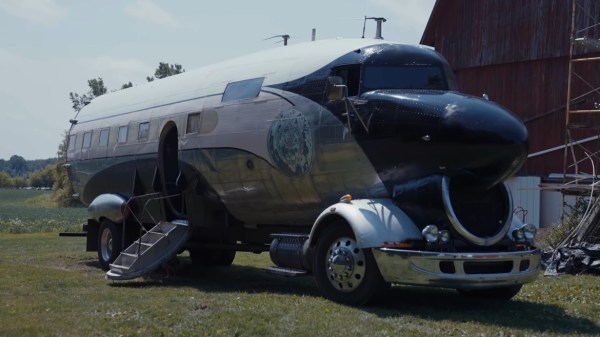 You remember how you wanted to combine everything as a kid? Like lions and tigers into ligers and so on? Well, some kids dream of transportation hybrids. For eighty-year-old [Gino Lucci], now an Air Force retiree, that dream involved a recreational vehicle that combined an airplane fuselage and a delivery truck. 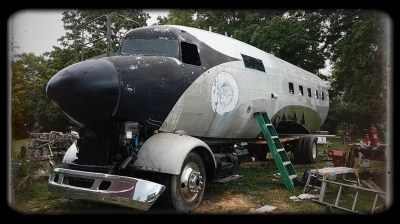 There it was, rusting in a field outside Rolla, Missouri — the vintage plane that would start [Gino Lucci] on the path to fulfilling this dream. This project began when [Gino]’s son spotted the body of a 1943 Douglas R4D military transport aircraft.

Over the next year, [Gino] and his sons painstakingly fused the fuselage to the chassis of an International DuraStar 4400 medium-duty truck. We love how they went about it. [Gino] and the boys just kept putting the two together and cutting away the fuselage in stages until they got it right. After making it roadworthy, it took another two years to work out the kinks.

The Fabulous Flamingo is 38 feet (11.6 meters) long and stands 12.5 feet (3.81 meters) tall. But the best metric is the width. It’s unspecified, but is apparently half an inch (1.27 cm) under the definition of what is street legal in Michigan. They used the plane’s engine cowlings as fenders and got the mirrors off of a ’70s Ford pickup. Floor it past the break and check it out.

This build cost about $20,000 USD all told. If you’ve got that kind of money, you could instead stuff a powerful engine into a tiny plane to get your kicks.