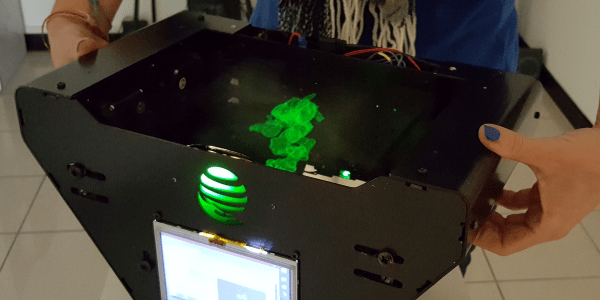 It seems like the world is ready for a true 3D display. We’ve seen them in sci-fi for decades now, with the ability to view a scene from any angle and inspect it up close. They’ve remained elusive, but that might just be changing thanks to this open-source persistence-of-vision volumetric display.

If the VVD, as it has been named by its creator [Madaeon], looks somewhat familiar, perhaps it’s because editor-in-chief [Mike Szczys] ran into it back in 2019 at Maker Faire Rome. It looks like it has progressed quite a bit since then, but the basic idea is still the same. A thin, flexible membrane, which is stretched across a frame, is attached to articulated arms. The membrane can move up and down rapidly, fast enough that a 1,000-fps high-speed camera is needed to see it move. That allows you to see the magic in action; a digital light processor (DLP) module projects slices of a 3D image onto the sheet, sending the correct image out for each vertical position of the membrane. Carefully coordinating the images creates the POV illusion of a solid image floating in space, which can be observed from any angle, requires no special glasses, and can even be viewed by groups.

With displays like this, we’re used to issuing the caveat that “it no doubt looks better in person”, but we have to say in the GIFs and videos included the VVD looks pretty darn good. We think this is a natural for inclusion in the 2021 Hackaday Prize, and we’re pleased to see that it made it to the semi-finals of the “Rethink Displays” round.