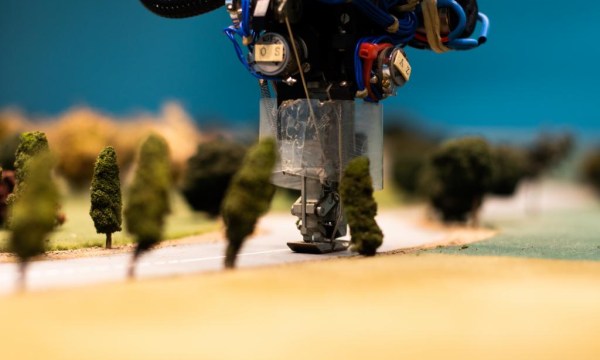 How do you build a practical tank-driving simulator in the 1970s, when 3D computer-generated graphics are still just a fantasy of the future? If you’re a European tanker school, the solution is to use a large CNC machine to drive a camera around a miniature terrain model (German, translated). In the video after the break, [Tom Scott] takes it for a test drive.

Developed in France, the simulator provided a safer and more cost-effective way for teaching new trainees the basics of driving Centurion, Leopard 2, or Panzer 68 tanks. The trainee sits in a realistic “cockpit” mounted on a hydraulically-operated motion platform, with a TV screen in front of his face, which is connected to a camera mounted on a large gantry-style CNC platform.

The camera’s lens is mounted just above a pivoting metal foot which slides across the 12 m-long terrain model and sends its angle to the hydraulic system. It will even alter the tank’s handling based on its current position on the model to simulate different surfaces like dirt, snow, or asphalt.

The last of these systems remained in use until 2004 at the military training center in Thun, Switzerland, before being saved by the Swiss Military Museum from being scrapped. The original 70s computer, electronics, and hydraulics finally gave out, so the museum undertook a complete refurbishment of the system to return it to working order for museum visitors. It was kept as original as possible, but parts for the original computer could not be found, so it was replaced with a Raspberry Pi and custom interface board.

Over three decades, these simulators probably trained a few thousand tank drivers, and even with limited technology did an excellent job of preparing trainees for the real thing. Besides providing training for operators, drivers and pilots, simulators are also just plain fun. We’ve seen some impressive home built simulator including a  A-10 Warthog, an F-15 sim built from an actual wreckage, and even a starship’s bridge.

END_OF_DOCUMENT_TOKEN_TO_BE_REPLACED