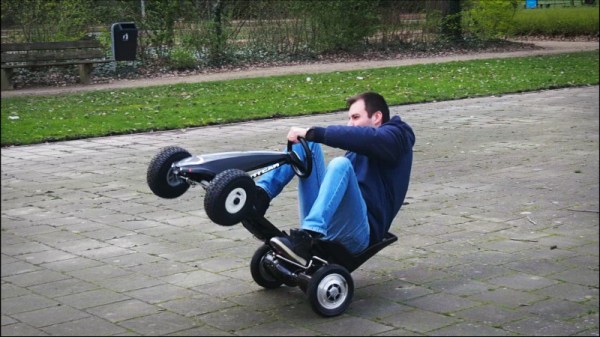 The hoverboard furnished to the world in the 2010s was not the one promised to us by Hollywood. Rather than a skateboard without wheels, we got a handsfree Segway, delivering faceplanting fun for the whole family. [Emanuel Feru] decided to repurpose his into a much safer electric kart.

The build starts with a pedal-powered children’s kart, which has its drivetrain and rear axle removed. The hoverboard is bolted in its place, with its track and wheel size conveniently similar enough to make this practical. The original circuitboards are left in place, reprogrammed with custom firmware for their new role. [Emanuel]’s code enables the stock hardware to drive the motors with Field Oriented Control, for better efficiency. Additionally, the hardware reads a set of pedals cribbed from a PC racing wheel for throttle input, replacing the original gyrometer setup. With field weakening enabled, [Emanuel] reports the kart reaching up to 40 km/h.

It’s a tidy hack that makes great use of all the original hoverboard hardware, rather than simply throwing new parts at the problem. We’ve seen similar hacks before, with Segways in lieu of 2015’s most dangerous Christmas gift. Video after the break.