[DJ Sures], mastermind behind the EZ-B Bluetooth Robot controller, sent in a really interesting build where he controls a robot with a 1983 TRS-80 computer.

The robot in question is [DJ Sures]’ adorable WALL-E we’ve seen before. WALL-E is controlled through a Bluetooth connection to a desktop PC with the EZ-Builder hardware and software package.

To get the Trash-80 talking to WALL-E, [Sures] connected a tiny Bluetooth module to the TX pin of the 6402 UART. It’s a very, very simple modification that adds a Bluetooth serial connection to one of the first notebook computers. After syncing the TRS-80 and WALL-E to the computer running EZ-Builder, it’s a piece of cake to make the robot respond to the clanging of a 30-year-old keyboard.

There’s a video of [DJ Sures] going over his build after the break with a wonderful demo of WALL-E freaking out to a little dubstep. Check that out after the break.

END_OF_DOCUMENT_TOKEN_TO_BE_REPLACED

[DJ Sures] has been pulling all-nighters lately to get his AR Drone Parrot build off the ground. Now that it’s up and flying around, he managed to get it to follow objects around the room using on board cameras.

For the build, [DJ Sures] used the AR Drone ‘flying video game’ quadrocopter. This toy has two on board cameras that can viewed over wifi. All that’s needed is some interesting software to make things fun. The camera tracking of EZ-Builder software was brought into the mix so the AR Drone can be controlled via object or speech recognition, wiimotes, tablets, or terminals.

[DJ Sures] has come up with some  awesome builds like a Bluetooth Teddy Ruxpin, realistic Wall-E, and an awesome Omnibot 2000 refurb. This is his first flying hack, and the first to fully exploit the camera tracking of the EZ-Builder software. Check out [Sures]’ copter following him around a room after the break.

END_OF_DOCUMENT_TOKEN_TO_BE_REPLACED 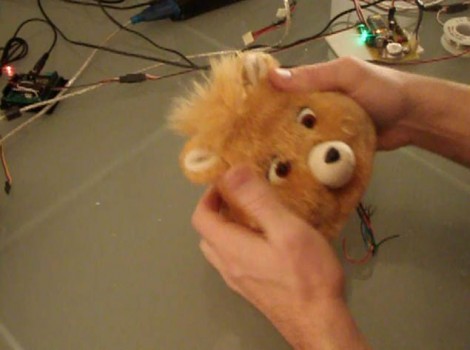 [DJ Sures] got his hands on a broken Teddy Ruxpin doll and decided to give it a new robotic life. You may want to ask the children to leave the room before viewing the video after the break. It starts right off with little Teddy having his throat slashed in order to get at the parts in the head. After retrofitting the eyes, mouth, neck, and arms with servos, Teddy gets a Bluetooth upgrade that lets you control his movements wirelessly. [DJ Sures] even has plans to get the little guy up and walking, far exceeding the original capabilities.