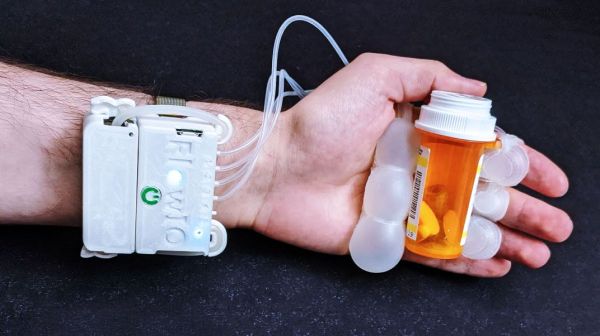 Join us on Wednesday, October 27 at noon Pacific for the Soft Robotics Hack Chat with Ali Shtarbanov!

By this point in technological history, we’ve all been pretty well trained in how to think about robots. Designs vary wildly, but to achieve their goals, most robots have one thing in common: they’re rigid. Whether it’s a robot arm slinging a spot welder on an assembly line or a robot dog on patrol, they’re largely made of stiff, strong, materials that, more often than not, are powered by electric motors of some sort.

But just because that’s the general design palette for robotics doesn’t mean there aren’t other ways. Robots, especially those that are intended to be used in close association with humans, can often benefit from being a little more flexible. And that’s where the field of soft robotics shines. Rather than a skeleton of machined aluminum and powerful electric actuators, these robots tend more toward silicone rubber construction with pneumatic activation. Some soft robots are even compliant and safe enough to be wearable, giving humans the ability to do things they never could before, or perhaps restoring functions that have been lost to the ravages of entropy.

Soft robotics is a fascinating field with the potential to really revolutionize things like wearables and collaborative robotics. To help us understand a little more about what’s going on in this space, we’re pleased to welcome Ali Shtarbanov to the Hack Chat. Ali is a Ph.D. student at MIT’s famed Media Lab, where he studies Human-Computer Interaction. He’s particularly interested in making soft robotics as fast and easy to prototype as traditional robotics have become, and to this end, he invented FlowIO, an open-source platform for pneumatic control. We’ll use this as a jumping-off point to discuss the whole field of soft robotics, especially where it is now and where Ali sees it going in the future.

Our Hack Chats are live community events in the Hackaday.io Hack Chat group messaging. This week we’ll be sitting down on Wednesday, October 27 at 12:00 PM Pacific time. If time zones have you tied up, we have a handy time zone converter.