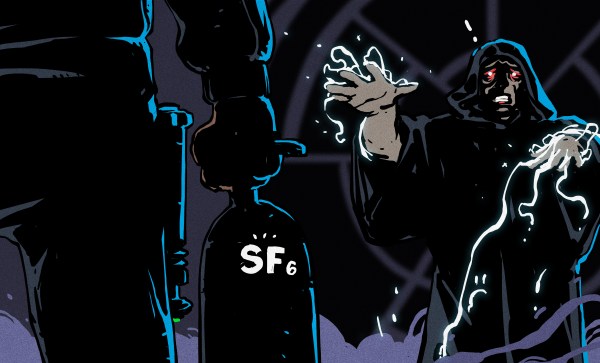 Sulfur hexafluoride (SF6) is not nearly as infamous as CO2, with the latter getting most of the blame for anthropogenic climate change. Yet while measures are being implemented to curb the release of CO2, for SF6 the same does not appear to be the case, despite the potentially much greater impact that SF6 has. This is because when released into the atmosphere, CO2 only has a global warming potential (GWP) of 1, whereas that of methane is about 28 over 100 years, and SF6 has a GWP of well over 22,000 over that same time period.

Also of note here is that while methane will last only about 12.4 years in the atmosphere, SF6 is so stable that it lasts thousands of years, currently estimated at roughly 3,200 years. When we touched upon sulfur hexafluoride back in 2019 in the context of greenhouse gases, it was noted that most SF6 is used for — and leaks from — high-voltage switchgear (mechanical switches), transformers and related, where the gas’ inert and stable nature makes it ideal for preventing and quenching electrical arcing.

With the rapid growth of highly distributed energy production in the form of mostly (offshore) wind turbines and PV solar parks, this also means that each of these is equipped with its own (gas-filled) switchgear. With SF6 still highly prevalent in this market, this seems like an excellent opportunity to look into how far SF6 usage has dropped, and whether we may be able to manage to avert a potential disaster.