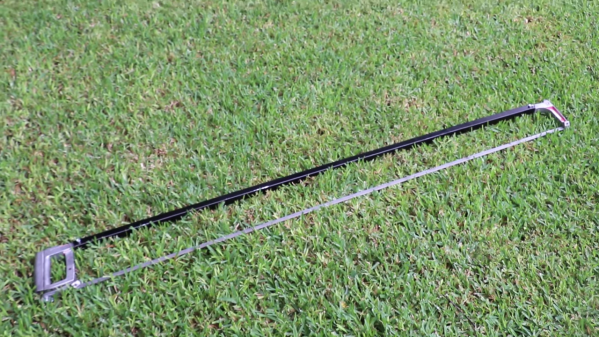 If we’re being honest, the main reason to buy a power tool is to avoid the pain of using one’s muscles. Oh sure, we dress it up with claims that a power tool will make us more productive, or give better results, but more often than not it’s the memory of how your forearm feels after a day of twisting a screwdriver that makes you buy a cordless driver.

It appears that [Artisan Makes] has a high tolerance for pain, seeing how the main prep tool in his metal shop is a plain old hacksaw. So in an effort to speed up his stock prep, he turned not to a bandsaw or cutoff saw, but instead built the world’s silliest hacksaw. It’s the metalworking equivalent of the two-man bucksaws that lumberjacks used to fell trees before chainsaws came along, and at a meter and half in length, it’s about the size of one too. Modifying the frame of his trusty hacksaw was easy — he just popped the end pieces off and attached them to an extra-long piece of tube stock. Finding a 1.5-meter hacksaw blade was the main challenge; not exactly a big-box store item, that. So a section of metal-cutting bandsaw blade was modified to fit the frame, and it was off to the races.

Or not. The video below tells the tale of woe, which starts with the fact that [Artisan]’s shop is too small for the hilariously long hacksaw. Solving the fixturing problems didn’t soo much to help, though — there was no way to tension the blade enough to get it to stop wobbling during cutting. It was also clear that the huge saw wasn’t able to apply enough downforce on the stock to get good cuts. Maybe with a second set of hands, though…

There are plenty of ways to improve hacksawing in the shop, and while this isn’t one of them, we sure appreciate the chuckle we got out of it. And you really should check out [Artisan Makes]’ channel — his more serious stuff is really good.