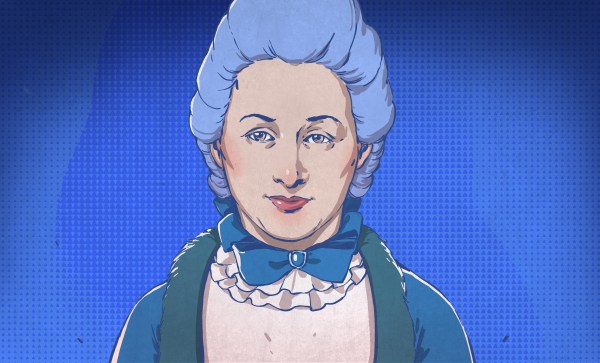 Émilie du Châtelet lived a wild, wild life. She was a brilliant polymath who made important contributions to the Enlightenment, including adding a mathematical statement of conservation of energy into her French translation of Newton’s Principia, debunking the phlogiston theory of fire, and suggesting that what we would call infrared light carried heat.

She had good company; she was Voltaire’s lover and companion for fifteen years, and she built a private research institution out of a château with him before falling in love with a younger poet. She was tutored in math by Maupertuis and corresponded with Bernoulli and Euler. She was an avid gambler and handy with a sword. She died early, at 41 years, but those years that she did live were pretty amazing. END_OF_DOCUMENT_TOKEN_TO_BE_REPLACED

Mathematics, as it is taught in schools, sometimes falls short in its mission to educate the pupils. This is the view of [Joan Horvath] and [Rich Cameron], particularly with respect to the teaching of calculus, which they feel has become a purely algebraic discipline that leaves many students in the cold when it comes to understanding the concepts behind it.

Their Hacker Calculus project aims to address this, by returning to [Isaac Newton]’s 1687 seminal work on the matter, Philosophiae Naturalis Principia Mathematica. They were struck by how much the Principia was a work of geometry rather than algebra, and they are seeking to return to [Newton]’s principles in a bid to make the subject more accessible to students left behind when it comes to derivatives and integrals. They intend to refine the geometric approach to create a series of practical items to explain the concepts, both through 3D printed items and through electronics.

We can see that this is an approach that has considerable merit, given that most Hackaday readers will have at some time or other sat through a maths lesson and come away wondering what on earth the teacher was talking about and having been baffled by further attempts to explain it through impenetrable maths-speak. If you were the kid who “got” calculus when the relationship between speed and acceleration – another thing we have [Newton] to thank for describing – was explained in your physics lessons, then you will probably understand.

The pair have some Hackaday Prize history, you may remember them from such previous entries as their 3D prints for the visually impaired project from last year.