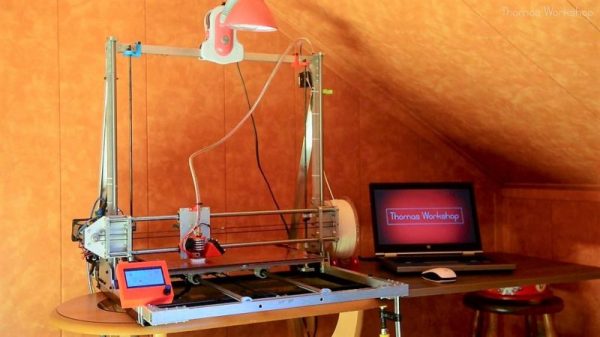 It’s so easy and so cheap to order things like CNC routers and 3D-printers off the shelf that we can be forgiven for forgetting what was once involved in owning machines such as these. It used to be that you had no choice but to build your machine from the ground up. While that’s less true today, it’s still the case if you want to push the limits of what’s commercially available, and this huge scratch-built 3D-printer is a good example of that.

It’s not exactly a fresh build – [Thomas Workshop] posted this last year – but it escaped our notice at the time, and we think the three-part video series below that details the build deserves a look over. When we say scratch built, we mean it. This machine started off as a bundle of aluminum and steel stock. No 80/20 extrusions, no off-the-shelf linear rails – just metal and a plan. The build was helped considerably by a small CNC router, which also had that DIY look, but most of the parts were cut and finished with simple hand tools. The resulting gantry allows an enormous work volume 40 cm in each dimension, with a heated bed that uses four heat mats. We were impressed that [Thomas] got the build just far enough to print parts that were used to finish the build – that’s the hacker spirit.

It’s perhaps not the biggest 3D-printer we’ve seen – that distinction might go to this enormous 8-cubic foot machine – and it certainly can’t print a house. But it’s an impressive build that probably cost a whole lot less than a commercial machine of similar capacity, and it’s got that scratch-built cred.