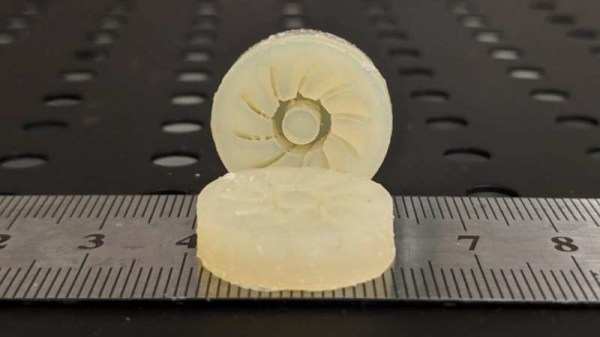 For those getting started with 3D printers, thermoplastics such as ABS and PLA are the norm. For those looking to produce parts with some give, materials like Ninjaflex are most commonly chosen, using thermoplastic polyeurethane. Until recently, it hasn’t been possible to 3D print latex rubber. However, a team at Virginia Tech have managed the feat through the combination of advanced printer hardware and some serious chemistry.

The work was primarily a collaboration between [Phil Scott] and [Viswanath Meenakshisundaram]. After initial experiments to formulate a custom liquid latex failed, [Scott] looked to modify a commercially available product to suit the project. Liquid latexes are difficult to work with, with even slight alterations to the formula leading the solution to become unstable. Through the use of a molecular scaffold, it became possible to modify the liquid latex to become photocurable, and thus 3D printable using UV exposure techniques.

The printer side of things took plenty of work, too. After creating a high-resolution UV printer, [Meenakshisundaram] had to contend with the liquid latex resin scattering light, causing parts to be misshapen. To solve this, a camera was added to the system, which visualises the exposure process and self-corrects the exposure patterns to account for the scattering.

It’s an incredibly advanced project that has produced latex rubber parts with advanced geometries and impressive mechanical properties. We suspect this technology could be developed quickly in the coming years to produce custom rubber parts with significant strength. In the meantime, replicating flexible parts is still possible with available filaments on the market. 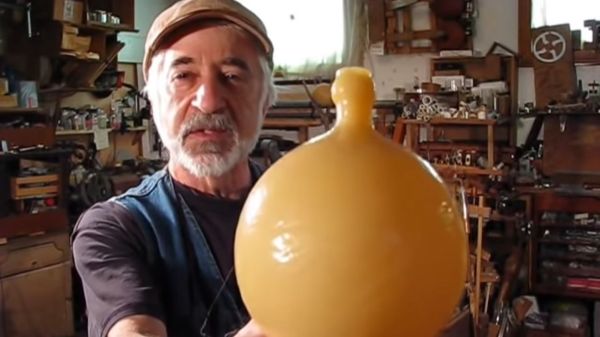 You would be forgiven for thinking that the semi-spherical bulb [Len], from the Bellowphone channel, is holding is a toilet bowl float. It is a bellows of his design that is similar to the squeezable part of a bike horn but is more substantial and less irritating at six in the morning. These rubber squeeze balls are old-school in the best way, and craftsmanship rolls out from every second of his videos. The backdrops to [Len’s] videos are alive with tools, materials, examples, and instruments the same way our offices and maker spaces erupt with soldering irons, LEDs, and passives.

His video walks through all the steps to make latex bellows starting with a rigid stemmed bulb and painting it with latex. This takes a bunch of coats with the associated drying time, so if you need a lot of bellows, you will want multiple bulbs. After coating of latex, we move to the contraption known as the Snout Master 5000. The SM5K looks like a wooden jig held in a table vise, but it is a purpose-built over-engineered chuck with four ball bearings held in a vise. When the latex is thick enough, the form is removed, and the bulb is repaired, then, more coats. Each ball has roughly twenty layers, and with three hours between coats, this is a weekend job at a minimum. Good things come to those who coat. The final steps are boiling the bulbs and adding a silicone preservative. They can last up to a decade with proper maintenance.

We see lots of electronic and automated instruments here, and spherical balls are definitely on the human interface spectrum, but the techniques we see from [Len] would allow anyone to design their own bellows more conducive to mechanization. [Len] says one of his inspiration is [Harry Partch] and his Blo-Boy, an organ powered by fireplace bellows. We think these squeeze balls are even better.

END_OF_DOCUMENT_TOKEN_TO_BE_REPLACED

[wjlafrance] recently picked up an old NeXTstation, complete with keyboard, mouse, display… and no display cable. The NeXT boxes had  a still weird DB-19 video connector, meaning [wjla] would have to roll his own. It’s basically just modifying a pair of DB-25 connectors with a dremel, but it works. Here’s the flickr set.

The guys at Flite Test put on a their first annual Flite Fest last month – an RC fly-in in the middle of Ohio – and they’re finally getting around to putting up the recap videos. +1 for using wacky waving inflatable arm flailing tube men as an obstacle course.

My phone’s battery is dead and my water pressure is too high.

Remember the Commodore 16? [Dave] stuck a PicoITX mother board in one. He used the Keyrah interface to get the original keyboard working with USB. While we’re not too keen on sacrificing old computers to build a PC, it is a C16 (sorry [Bil]), and the end result is very, very clean. Engineers just do things differently, which is why this hack makes a lot of sense to us. Instead of choosing a platform like Open Office to maintain his resume [Campbell Hennessy] renders his employment and references using LaTeX.

We separate content from styling on the web all the time using CSS and content management systems (Hackaday uses WordPress). And with the online component of employment history and job applications becoming progressively more important it makes a lot of sense to prepare your CV accordingly.

LaTeX is a markup language that makes graphically pleasing typesetting effects a snap. We’ve seen it used to label resistor storage tubes and server side hacks to embed the markup in HTML. If you haven’t tried it out yourself just grab your resume (which probably needs updating anyway), a LaTeX rendering tool of your choice, crack those knuckles, and follow along with [Campbell’s] experience.