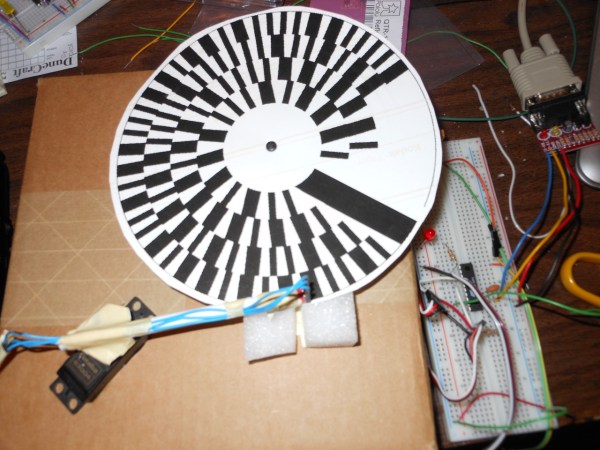 This low-resolution memory device packs in just a few bytes of data. But it’s enough to spell out [Michael Kohn’s] name. He’s been experimenting with using paper discs for data storage.

His technique becomes immediately clear when you view the demo video below. The disc spins multiple times with the sensor arm reading one track. This gives the system the chance to measure the black band in order to get the data timing figured out. Once the outer track has been read the servo controlling the read head swings it to the next until all of the data is captured.

An Arduino is monitoring the QTR-1RC reflectance sensor which makes up the reading head. It uses the black band width in order to establish the size of an individual byte. Interestingly enough, the white parts of the disc do not contain data. Digital 0 is a black area 1/4 the width of the large black strip, and digital 1 is half as wide.

[Michael’s] set up the generator which makes the discs so that he can easily increase the resolution. The limiting factor is what the reading hardware is able to detect.

END_OF_DOCUMENT_TOKEN_TO_BE_REPLACED END_OF_DOCUMENT_TOKEN_TO_BE_REPLACED

It’s no secret that [Adam Savage] of Mythbusters fame is a huge fan of replica props, going so far as to make a Maltese Falcon out of Sculpey. This time, though, he’s doing one better for the nerds in the crowd by building the most accurate replica of Han Solo’s blaster ever.

Replica prop gurus already know [Lucas]’ original prop department based Han Solo’s BlasTech DL-44 blaster off an existing gun – the Mauser C96. Along with this gun, there were a few extra bits and bobs tacked onto this gun, including an old German scope, a flash hider from an aircraft machine gun, and even a few bits of metal from a model airplane.

All these extra parts and greeblies are very hard, if not impossible to find. Thankfully, there are a bunch of very skilled replica prop makers reproducing these parts for anyone who wants a very accurate DL-44 Blaster. [Norm] from Tested and [Adam] assembled these parts into an incredibly accurate replica of the ‘hero’ blaster – by far the most identifiable of Solo’s many iterations of blaster seen in Star Wars ep. IV. Quadcopters are the epitome of high-tech hobby electronics. We’re quite used to seeing the frames built out of modern materials (carbon fiber, 3d printed, etc). But it’s pretty hard to beat the strength-to-weight ratio of kebab skewers. You heard us correctly. [Shiny Shez] built his quadcopter frame from kebab skewers.

You might want to get that Boy Scout Handbook out and brush up on your lashing skills. Lashing is a method of using rope (string in this case) to fasten together wooden sticks (bamboo kebab skewers). Once the lashed joints are precisely oriented [Shiny] applies a liberal coat of super glue to cement them in place.

He went the easy route when it comes to control hardware. You can get spare parts for the Husban X4, a commercially available quadcopter. Its main controller is used here. The single board controls the motors, monitors an IMU to keep the aircraft stable while in flight, and includes a wireless transceiver. On the receiving side [Shiny] uses an Arduino with a wireless module. This way he can control the quadcopter from his laptop, or go one step further and use an Android phone. Engineers just do things differently, which is why this hack makes a lot of sense to us. Instead of choosing a platform like Open Office to maintain his resume [Campbell Hennessy] renders his employment and references using LaTeX.

We separate content from styling on the web all the time using CSS and content management systems (Hackaday uses WordPress). And with the online component of employment history and job applications becoming progressively more important it makes a lot of sense to prepare your CV accordingly.

LaTeX is a markup language that makes graphically pleasing typesetting effects a snap. We’ve seen it used to label resistor storage tubes and server side hacks to embed the markup in HTML. If you haven’t tried it out yourself just grab your resume (which probably needs updating anyway), a LaTeX rendering tool of your choice, crack those knuckles, and follow along with [Campbell’s] experience.

[Arvydas] recently bought a Rock Band 3 Wii keyboard thinking it would be an excellent and very inexpensive (£9.99) MIDI controller. The keyboard has a proper DIN-5 MIDI out port, so theoretically the only thing needed to plug this into a computer is a USB to MIDI adapter. Unlike the keyboard, the MIDI adapter was a cheap piece of Chinese cruft, but given some ingenuity and a handful of components, he was able to get everything working.

The 30-year-old MIDI specification includes a few schematics on how to properly connect MIDI devices together. The most important part of these schematics is an optoisolater on the MIDI in, a valuable addition considering early MIDI keyboards cost thousands of dollars. It seems [Arvydas]’ MIDI to USB adapter didn’t include this vital component, instead replacing it with a simple resistor. Anything to keep costs down, right?

To get the MIDI adapter working, [Arvydas] headed over to Maplin and bought an optioisolator, With everything wired up on a breadboard, he got it to work and eventually transplanted the circuit to the adapter’s PCB.

It’s a great piece of work to get this MIDI adapter functioning, especially since it’s doubtful the cheap adapter would have worked with any MIDI device.

After perusing Amazon one day, [Dave] found a very interesting piece of kit: a small, 1.5″ digital picture frame. They’re not very complex, just an LCD, a few buttons to cycle the picture, and a battery to keep everything portable. He decided the best use of this tech would be a tiny arcade cabinet, featuring screen shots of the best games a darkly neon lit arcade of the late 80s had to offer.

After sourcing a few of these digital picture frames on eBay, [Dave] set to work disassembling the frames and designing a custom enclosure. He wanted a few specific features: controls in the right place, replaceable sides, and the glowing red eyes of a coin acceptor slot. [Dave] whipped a model up in OpenSCAD and sent the parts over to his printer.

The controls for the digital picture frame were connected to a quartet of tact switches on the control panel, and a red LED provides the glow from the coin acceptor. With a USB plug and the frame’s memory loaded up with screen shots, [Dave] has a fabulous desk toy.

All the relevant files are up on Thingiverse if you’d like to build your own.