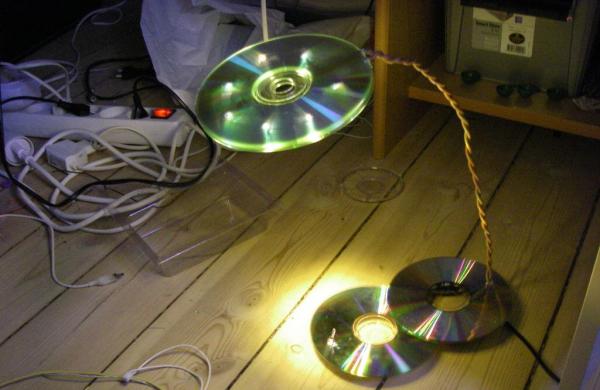 [Artificial Intelligence] has made a desk lamp out of parts he had kicking around in his parts bin. Most recognizable are the 4 CDs that make up the base and the shade. To start this project, [Artificial Intelligence] sketched out a circular pattern on one of the CDs and marked 7 locations where the LEDs will be. Holes were drilled at those marked locations, the LEDs inserted and hot glued into place. Each LED has its own current limiting resistor soldered in a series configuration.

[Artificial Intelligence] mentions the resistor value was determined by a nice LED resistor calculator he found online, ledcalc.com. Then each LED/resistor combo was wired together in a parallel configuration and covered up by another CD to clean up the look and protect the wiring.

The base, like the top, is also made from 2 CDs, but this time there are 5 AA batteries underneath the CDs. These batteries don’t power the lamp, they are only used as a counterweight to prevent the lamp from tipping over. A USB cord runs to the lamp base, goes through an on/off switch and then up a pair of large-gauge solid core wire before connecting to the LED’s in the top of the lamp. The thick solid core wire acts as the only support for the lamp shade and LEDs. Since it is still just wire, the lamp can be bent to shine light in the most convenient position, as any good desk lamp would be capable of.