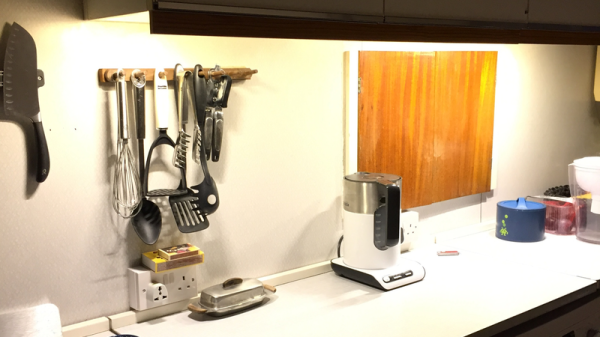 Controlling the Internet of Things is all about passing information around. Realistically, it doesn’t matter what is used, be it MQTT, HTTP, serial data, whatever, and it doesn’t really matter what data is sent as long as the sender and receiver agree on what the data means. MIDI could be used to pass information back and forth, for example and while MIDI is good for some things, Open Sound Control is a more modern alternative and one area where OSC excels over MIDI is Internet connectivity. [Matt] used OSC to control the lighting he installed in his kitchen.

[Matt] had moved in to a new house and wanted some under-cupboard lighting for his kitchen. He got a few cheap warm white LED lights from the Internet and went about wiring them together. For the controller, an ESP8266-1 was used as well as a 12 volt constant-current buck converter. The software runs on the Sming framework, rather than the Arduino framework, and listens for incoming OSC messages. When it receives a command on a specific channel, a callback function turns the lights on and off.  [Matt] also added a switch on the outside of the control box to manually turn the lights on and off.

OSC might not be the right choice for this project, and even [Matt] doesn’t know why he used it, but [Matt] got it working and uses an app on his phone to control it. If he wanted to, he could have used Ableton or another controller to control the lights. (He hasn’t wanted to yet.) OSC is an interesting alternative to MIDI and can also be used with an Arduino without an ethernet shield, or with RFID tags. 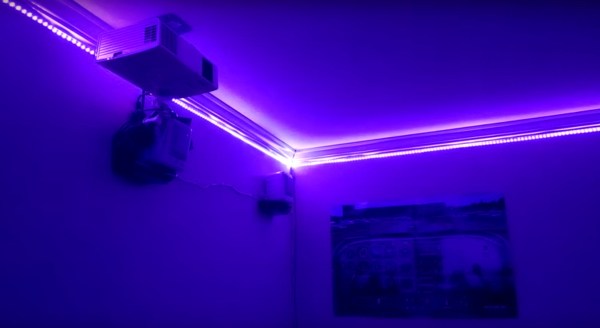 Sure, you could get a regular light fixture like a normal person… Or you could use close to a thousand RGB LEDs to light your room!

That’s what [Dmitry] decided to do after trying to figure out the best way to light his pad. You see, his room is 4 by 4 meters, and WS2812 RGB LED strips happen to come in 4 meter lengths… Coincidence? We think not.

The problem with using 16 meters of LED strips is powering them… You see, at 16 meters, you’re looking at about 5V @ 57.6A — and we’re guessing you probably don’t have a 5V 60A power supply handy. Not to mention if you run them in series, the resistance of the system is going to kill your efficiency and the last LEDs probably won’t even work… So [Dmitry] had to break the system up. He has two power supplies feeding the strips from the middle of each pair — that way, he doesn’t have to worry about any voltage drops due to the length of the strips.

END_OF_DOCUMENT_TOKEN_TO_BE_REPLACED I’ve been getting some good looking mods on the tips line, so I thought it was time for a bit of bling on Hack-A-Day.

[f00-F00] sent in his ever so lightly modded iPod. It’s a bit similar to his force feedback PSP mod, but in this case, the leds lighting up the clear case are music sensitive.

The not too shabby looking [flooky] sent in her latest use for the SEGA Dreamcast, a guitar. (Hopefully soon to have three more strings.)

[crait] decided to steal 5v to power a Dreamcast VMU from his PS/2 port.

Oh, and if you dig our logo, you might be amused by skulladay.

I’ve got my travel plans for Defcon 15 set up. [Eliot] will certainly be skulking around vegas, so we’ll see you there.