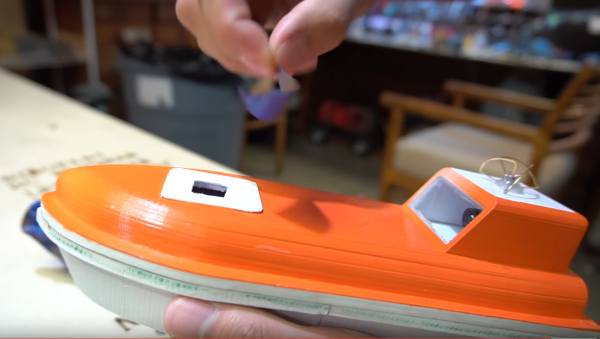 Radio control boats usually bring up thoughts of racing catamarans, or scale sailing yachts. This build takes things in a slightly different direction. A radio controlled lifeboat with a built-in First Person View (FPV) transmitter. [Peter Sripol] used to be one of the awesome folks over at Flite Test. Now he’s gone solo, and has been cranking out some great builds on his YouTube channel. His latest build is a lifeboat loosely based on the totally enclosed lifeboats used on oil tankers and other seafaring vessels.

[Peter] designed the boat in 3D modeling software and printed it on his Lulzbot Taz 6. The files are available on Thingiverse if you want to print your own. The lower hull was printed in two pieces then epoxied together. Peter’s musical build montage goes by fast, proving that he’s just as good editing video as he is scratch-building R/C craft. Along the way he shows us everything from wiring up speed controls to cutting and soldering up a rudder. The final touch on this boat is a micro FPV camera and radio transmitter. As long as the boat is in range, it can be piloted through video goggles.

[Peter’s] boat is destined to be tested on an upcoming trip to Hawaii, so keep an eye on his channel to see how it fares in the monster waves!