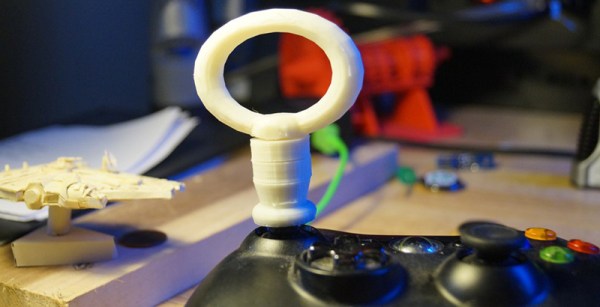 Hackaday alum [Caleb Kraft] has been busy working on control modifications for gamers with disabilities. His latest release is a modular system of thumbstick extensions for the Xbox 360 and Xbox One. Since starting The Controller Project, one of [Caleb’s] goals has been to create a system to facilitate the use of analog thumbsticks. Now that he has a few controller mods under his belt, [Caleb] decided to attack the problem head on. Rather than print a custom adapter for each gamer, he’s created a set of 3D printed extensions which can be mixed and matched to produce the perfect controller mod.

The base fits perfectly over the Xbox thumbstick. The fit is tight enough to stand up to some serious gaming, but can be easily removed with no permanent change to the controller. Extensions stack on top of the base to build up a large easy to grasp stick. There are straight and angled extensions to accommodate specific disabilities. The stick can be capped off with a rounded tip or an easy to grip knob. The exertions are designed to fit together loosely for testing. Once the gamer finds a perfect stack of extensions, a bit of glue locks everything together.

The best part is that [Caleb] has released the files for the entire system. 3D printers are becoming common enough that nearly everyone has access to a printer, or knows someone who does.  Click past the break to see [Caleb] demonstrate the modular thumbstick extension system!

END_OF_DOCUMENT_TOKEN_TO_BE_REPLACED

Former HaD’er [Phillip Torrone] has written an extensive collection of Open Source Hardware projects for Make Magazine. This impressive list covers over 125 projects and kits, broken into 19 categories including 3d Printing, Music, Robotics, and Wireless systems. A number of these projects have been either extensively detailed or mentioned on HaD, so there is bound to be something for everyone here.

[Phillip] is not only detailing these projects for people new to the Open Source Hardware movement, but is also calling for new and unheard of projects to be listed in places like this, as well as central locations such as the OSH Wikipedia page. We are sure that a number of HaD readers will be answer this challenge.

Thanks again to [Phillip] for sharing this with us.

Make’s television series will be premiering on public television across the US over the next couple days. If it’s not showing in your area, you aren’t out of luck. All of the segments from the first episode have already been published online at makezine.tv.

Make Magazine, famous for the Maker Faire, among other things, has announced a new project called Make: television. The show will be coming to public television stations throughout the USA starting early 2009. The big news is that you can submit 2 minute long videos of your projects to be included in the show’s Maker Channel segment. The bigger news is that if your video is selected, they’ll send you a $50 gift certificate from the Maker Shed and a free year of Make Magazine.