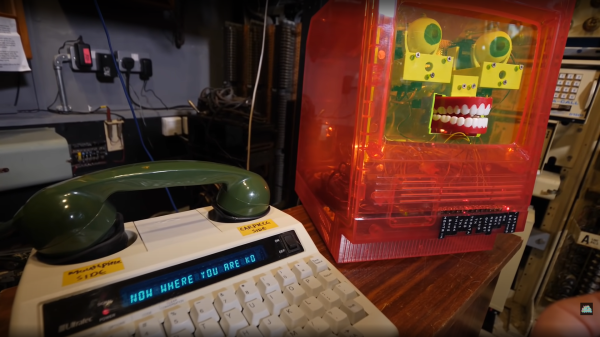 [Sam Battle] known on YouTube as [Look Mum No Computer] is mostly known as a musical artist, but seems lately to have taken a bit of shine to retro telecoms gear, and this latest foray is into the realm of the minicom tty device which was a lifeline for those not blessed with ability to hear well enough to communicate via telephone. Since in this modern era of chatting via the internet, it is becoming much harder to actually find another user with a minicom, [Sam] decided to take the human out of the loop entirely and have the minicom user talk instead to a Raspberry Pi running an instance of MegaHal, which is 1990s era chatterbot.  The idea of this build (that became an exhibit in this museum is not obsolete) was to have an number of minicom terminals around the room connected via the internal telephone network (and the retro telephone exchange {Sam] maintains) to a line interface module, based upon the Mitel MH88422 chip. This handy device allows a Raspberry Pi to interface to the telephone line, and answer calls, with all the usual handshaking taken care of. The audio signal from the Mitel interface is fed to the Pi via a USB audio interface (since the Pi has no audio input) module.