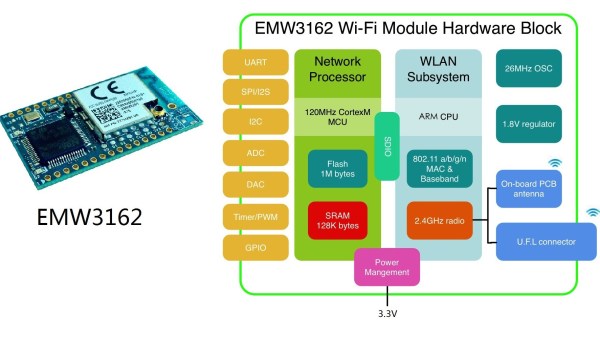 The availability of cheap radio modules is making them ubiquitous in an increasing number of projects that we have been seeing recently. The usual go-to solution is using any one of the several modules based on the ESP8266 device. [Willem] wrote in to share with us his experiences with another radio module – the EMW3162 from MXChip, which at $10 isn’t as cheap as the ESP8266 modules, but is a more capable, power packed, device.

The EMW3162 (PDF datasheet) is a low-power embedded WiFi module with integrated wireless LAN, and a STM32F205 Cortex-M3 microcontroller that runs a “self-hosted” WiFi networking library and software application stack. The microcontroller has 1M flash, 128k RAM and runs at 120MHz. And since MXChip is a Broadcom partner, they are allowed to use the WICED_SDK.

The on-board ARM M3 means all kinds of useful interfaces are available: UART, SPI, I2C, ADC, DAC, PWM, TIMERS, GPIO, and a JTAG flash interface. The good news could be on the power consumption figures – the module is touted to be low-power, and the data sheet shows 7mA when connected to an access point but with no data transfer. When transmitting at 20kbps, the current draw is about 24mA, which goes up to 320mA at 11Mbps.

[Willem] has his EMW3162_WICED repository up on Github, but also take a look at the MXChips MICO (Mico-controller based Internet Connectivity Operation System) repository. At the moment, he has it working using Linux, with a gnu gcc compiler and a JLINK JTAG programmer. He also has the WICED SDK working and has a WiFi AP with an on-board 120MHz arm chip. It would be interesting to hear about other users’ experiences with this radio module. Do let us know in the comments below!