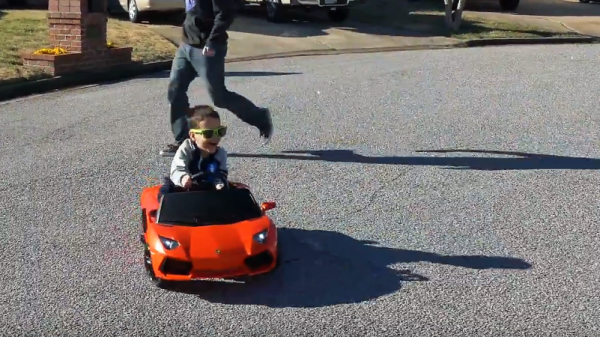 We’ve all heard the complaints from oldsters: “Cars used to be so simple that all you needed to fix them was a couple of wrenches and a rag. Now, you need a computer science degree to even pop the hood!” It’s true to some extent, but such complexity is the cost of progress in the name of safety and efficiency. And now it seems this complexity is coming way down-market, with this traction control system for a Power Wheels Lamborghini.

While not exactly an entry-level model from the Power Wheels line of toddler transportation, the pint-sized Lamborghini Aventador [Jason] bought for his son had a few issues. Straight from the factory, its 6-volt drivetrain was a little anemic, with little of the neck-snapping acceleration characteristic of an electric drive. [Jason] opted to replace the existing 6-volt drive with a 12-volt motor and battery while keeping the original 6-volt controller in place. The resulting rat’s nest of relays was unsightly but sufficient to see a four-fold increase in top speed.

With all that raw power sent to only one wheel, though, the Lambo was prone to spinouts. [Jason] countered this with a traction control system using optical encoders on each of the rear wheels. A NodeMCU senses speed differences between the wheels and controls the motor through an H-bridge to limit slipping. As a bonus, a smartphone app can connect to the Node for in-flight telemetry. Check out the build and the car being put through its paces by the young [Mr. Steal Your Girl] in the video below.

The Power Wheels platform is infinitely hackable – from repairs to restorations to enhancements of questionable sanity, it seems like there’s nothing you can’t do with these little electric vehicles.