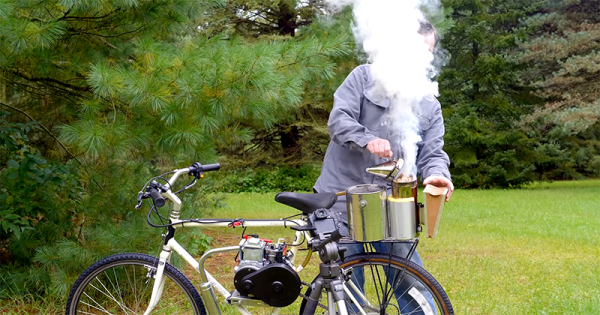 Some of the earliest automobiles weren’t powered by refined petrochemicals, but instead wood gas. This wood gas is produced by burning wood or charcoal, capturing the fumes given off, and burning those fumes again. During World War II, nearly every European country was under gasoline rations, and tens of thousands of automobiles would be converted to run on wood gas before the war’s end.

In the century or so since the first car rolled on wood gas, and after hundreds of books and studies were published on the manufacturing and development of wood gas generators and conversion of internal combustion engines, there’s one question: can someone convert a moped to run on wood gas? [NightHawkinLight] finally answered that question.

The basic setup for this experiment is a tiny, tiny internal combustion engine attached to a bicycle. Add a gas tank, and you have a moped, no problem. But this is meant to run on firewood, and for that you need a wood gas generator. This means [NightHawkinLight] will need to burn wood without a whole lot of oxygen, similar to how you make charcoal. There is, apparently, the perfect device to do this, and it’ll fit on the back of a bike. It’s a bee smoker, that thing bee keepers use to calm down a hive of honeybees.

The bee smoker generates the wood gas, which is filtered and cooled in a gallon paint bucket filled with cedar chips. The output from this filter is fed right into where the air filter for the internal combustion engine should be, with an added valve to put more air into the carburetor.

So, with that setup, does the weird bike motorcycle wood gas thing turn over? Yes. The engine idled for a few seconds without producing any useful power. That’s alright, though, because this is just a proof of concept and work in progress. Getting this thing to run and be a useful mode of transportation will require a much larger wood gas generator, but right now [NightHawkinLight] knows his engine can run on wood gas.

Everyone’s favorite machinist, tinkerer, YouTube celebrity, deadpan comedian, and Canadian is back with a tale of popping a few benzos, stumbling around Mexico, and wondering why everyone else on the planet is so stupid.

The hero of our story considered the feasibility of one hundred and eighty-sixth trimester abortions as he stood outside a Mexican airport watching a stockbroker complain about the battery in his cellphone. Meanwhile, cars drove by.

Here’s how you charge a phone with a car battery and an ‘ol Dixon Ticonderoga.

To charge a battery, all you really need to do is connect the terminals to a power source with the right voltage. A cell phone battery needs about three volts, and a car battery has twelve. You need a voltage divider. You can get that with a pencil. Take out a knife, get to the carbon and clay wrapped in wood, and wire the battery up. Make a cut a quarter of the way down this rather long resistor, and there you will find something around three volts.

Does it work? Yeah. It works even better if you have some tape to hold wires onto the cell phone battery when charging. Is it smart? It is if there is no other conceivable way of charging your cell phone. Should you do it? Nah. Video below. Thanks [Morris] for the link.