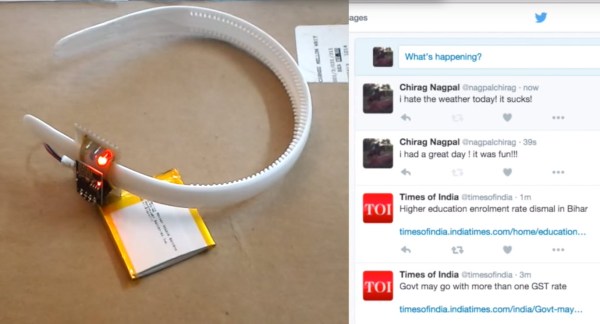 After learning how to use the ESP8266, [Chirag Nagpal] decided to do a fun project to experiment that polls data from Twitter. He calls it the Sentiband, and it analyses your last tweet’s sentiment and changes color accordingly.

There is an API available called Sentiment140 (Formerly ‘Twitter Sentiment’) which is capable of determining the emotional content of a tweet on Twitter. It uses classifiers built from machine learning, and was developed at Stanford by a few CS graduates. We’ve seen it used before on a Christmas tree ornament on a much larger scale, analyzing all holiday tweets to light up your tree.

[Chirag’s] version allows you to set a username and display the latest sentiment of that user’s tweets hidden in the subtext. Three LEDs light up; green for a positive tweet, red for negativity, and blue for neutral.