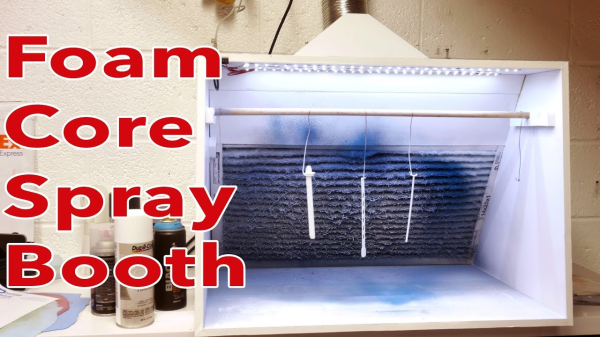 Industrial designer [Eric Strebel] has access to big, walk-in spray booths, but bigger isn’t always better. For small jobs, it’s overkill, and he wanted his own spray booth anyway. If you’re ready to upgrade from that ratty old cardboard box in the garage, look no further than [Eric]’s spray booth how-to after the break.

If you don’t already know, [Eric] is something of a foam core legend. He has several videos about model building techniques that produce really slick results, so it’s no surprise to see these skills transfer to a larger build. The booth is built from a single 40″ x 60″ sheet of 1/2″ foam core board, a furnace filter, and a vent fan modified to fit his shop’s system. The whole thing cost less than $200, most of which goes toward the fan.

[Eric] modified an existing spray booth plan to fit his needs and added some really nice touches along the way. All the edges are beveled and the unfinished faces are taped, so at first glance it looks like it’s made out of painted wood or melamine board. The furnace filter slides out one side for easy replacement and is braced with foam scraps so it won’t fall forward. The best part of this booth is the LED strips—they make for way better working conditions than the dim recesses of a cardboard box.

If you’d rather build a walk-in spray booth, why not make your own sliding barn doors, too?

END_OF_DOCUMENT_TOKEN_TO_BE_REPLACED

For several years, [Randy]’s spray paint booth was a simple cardboard box. Sure, it kept the overspray contained to a small area, but there was a lot of room for improvement. Luckily, after replacing his dishwasher he had the makings of an excellent spray paint booth that can be put together in a few hours.

The build began by tearing apart the old dishwasher and getting rid of just about everything; the door, plumbing, and electrical were all discarded leaving [Randy] with a plastic husk. After installing a small fluorescent light, plugging the drain hole, and making a simple lazy Suzan, [Randy] had a proper spray booth on his hands.

[Randy] opted not to put in a ventilation system; he was, after all, working with non-toxic vapors. If you’re planning on gutting a dishwasher for use with some nasty chemicals, it might be a good idea to use the drain hole as a ventilation port.