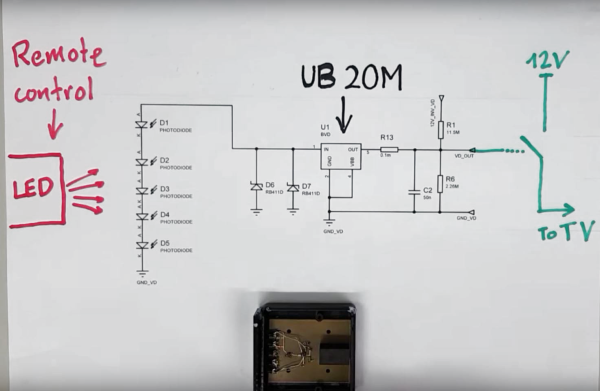 How much effort do you put into conserving energy throughout your daily routine? Diligence in keeping lights and appliances turned off are great steps, but those selfsame appliances likely still draw power when not in use. Seeing the potential to reduce energy wasted by TVs in standby mode, the [Electrical Energy Management Lab] team out of the University of Bristol have designed a television that uses no power in standby mode.

The feat is accomplished through the use of a chip designed to activate at currents as low as 20 picoamps.  It, and a series of five photodiodes, is mounted in a receiver which attaches to the TV. The receiver picks up the slight infrared pulse from the remote, inducing a slight current in the receiving photodiodes, providing enough power to the chip which in turn flips the switch to turn on the TV. A filter prevents ambient light from activating the receiver, and while the display appears to take a few seconds longer to turn on than an unmodified TV, that seems a fair trade off if you aren’t turning it on and off every few minutes.

END_OF_DOCUMENT_TOKEN_TO_BE_REPLACED Evil Mad Scientist Laboratories is preparing for Halloween with this standby-mode pumpkin. Inside there’s an LED plugging a hole that is drilled just to the skin of the gourd-like vegetable. It fades in and out similar to a sleeping Mac, using what we think is a vastly over-powered circuit based on an ATtiny2313 (1k  of programming space for this?). But we still like the idea and we’d enjoy seeing it scaled up to a full LED matrix.

We’ve come to expect pumpkin hacks from EMSL and they don’t disappoint. Last year was a mechanized version, and the year before an LED schematic symbol. So what about your creation? With about one week left, take a look around and see if you can’t create something as wonderful as the Pie of Sauron.