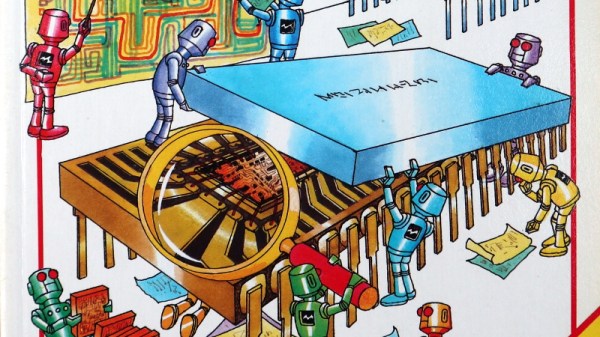 Lockdown is boring. No, let’s emphasize that, lockdown is really boring. Walking for exercise is much less fun than it was last year because it’s a wet and muddy February, and with nowhere open, a rare trip out to a McDonalds drive-through becomes a major outing. Stuck inside for the duration we turn our eyes to some of the older ways to wile away the time. Books. Remember them? In doing that I found that the friend whose house I’m living in has the whole library of Usborne children’s computer and technology books from the 1980s. Suddenly a rainy day doesn’t matter, because we’re in a cheerful world of cartoon robots and computer parts!

If this leaves you none the wiser, it’s worth explaining that during the 1980s home computer boom there was no Internet handily placed for finding out how your new toy worked. Instead you had to read books and hoard the scraps of information they contained. Publishers responded to this new world of technology with enthusiasm, and the British children’s publisher Usborne did so in their characteristic entertaining and informative style. For probably the only time in history, children were presented with mainstream books telling them how to write machine code and interface directly to microprocessors, and those among them who probably now read Hackaday took to them with glee. They remain something of a cult object among retrocomputing enthusiasts, and fortunately a selection of them are available for download. Usborne are still very much in business producing up-to-date books educating today’s children, and to promote some of their more recent titles for the Raspberry Pi they’ve released them in electronic form. END_OF_DOCUMENT_TOKEN_TO_BE_REPLACED