If you read almost any article about powered human implants, you will encounter the same roadblock, “it could be so much better with more powerful batteries.” Our fleshy power systems are different from electrical systems, but we are full of moving parts, so [Xudong Wang] and fellow researchers have harnessed that power (Sci Hub Alt) and turned it right back into something else our body understands.

The goal of this project is to control obesity by tricking the vagus nerve into thinking we are full as we digest our current meal. The treatment has already been proven with battery-powered implants, but this version uses the oscillations of the stomach for power and sends the generated power right where it is needed. A control group of rats showed no change over 100 days, but those with this implant shed more than a third of their body weight. This may need some tuning but its effectiveness seems to be heading the right way, and it is surgically reversible.

The device is a triboelectric generator coated in polyimide and Ecoflex™ with gold electrodes that wrap around the vagus nerve at the gastro-esophageal junction. The generator presses against the stomach from outside and the rhythm of the muscles generates the signal that the stomach is full so it becomes a loop of digesting ⇄ sated.

Another handful, of implants don’t need power from inside the body and use RFID technology.
Via IEEE Spectrum. 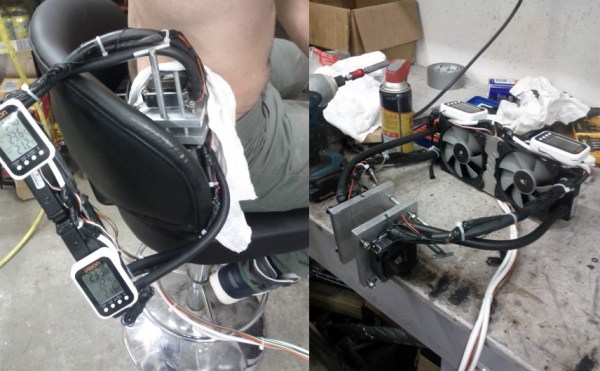 You’re probably wondering why [Eddy], pictured above, decided to clamp two CPU cooling blocks to his torso. We were a bit concerned ourselves. As it turns out, [Eddy] has managed to construct his own Cryolipolysis device, capable of delivering targeted sub-zero temperatures to different parts of the body using a technique more popularly known as “Coolsculpting.”

Cryolipolysis is a non-surgical method of controlled cooling that exposes fat cells to cold temperatures while also creating a vacuum to limit blood flow to the treated area. [Eddy’s] challenge was to discover exactly how cold to make the treatment surfaces—a secret close-guarded by the original inventors. After digging through the original patent and deciding on a range between -3C and 0C, [Eddy] began cobbling together this medical masterpiece and designing a system capable of controlling it.

His finished build consists of a simple three-button interface and accompanying LCD screen, both wired to an Arduino, allowing the user to adjust temperatures and keep tabs on a session’s time. Unfortunately, results can take several months to appear, so [Eddy] has no idea whether his creation works (despite having suffered a brush with frostbite and some skin discolorations, yikes!) You can pick through a gigantic collection of photos and detailed information over at [Eddy’s] project blog, then stick around for a video from an Australian news program that explains the Coolsculpting process. Need some additional encouragement to experiment on yourself? You can always strap some electrodes to your head and run current through them. You know, for science.