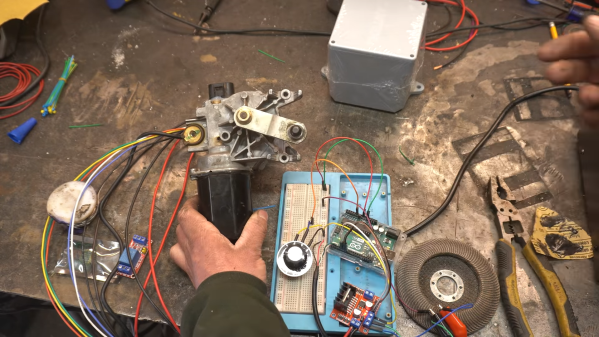 When you’re driving around, you might occasionally notice your indicators or windscreen wipers sync up fortuitously with the music. [Cranktown City] wanted to ensure his wipers would always match the beat, however, and set about making it so.

After disassembling the wiper motor, The original controller PCB is ripped up, used solely for its home position contacts that help determine the position of the wipers. The battered board is then drilled out to fit a rotary encoder to track the wipers throughout their full motion.

The final build does work, though in a different way to other designs we’ve seen. Rather than measuring BPM and syncing on a four-to-the-floor pulse, it simply tracks the lower band output and thus is more reactive to funky drum beats.

It’s a fun way to modify your car, even if it did require cutting a chunk out of the hood. If you’re cooking up your own cheeky automotive hacks, be sure to drop us a line. Video after the break. END_OF_DOCUMENT_TOKEN_TO_BE_REPLACED