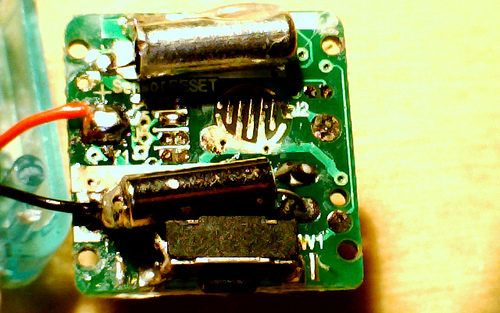 We’ve seen these little toys called “sugar cubes” by GirlTech around for a while now. They are a toy block, with an LCD on the front and they respond to movement, button presses and they interact with each other if you stack them up. We’re just as curious as anyone else about their internals, but maybe not quite curious enough to rush out and buy one. Luckily, we don’t have to as [Joby] has done it for us and documented what he found. While it may be lacking in extreme detail, at least our curiosity is somewhat satiated.
We can see that it has a 16×16 LCD, an unknown chip hidden under an epoxy blob as usual. To determine what character is shown, you can bridge one of 4 spots on the PCB, though he has only managed to switch to a little ninja and a question mark. Does anyone have any brilliant ideas on a project for these?