[alexandros] works for resin.io, a website which plans to allow users to update firmware on embedded devices with a simple git push command. The first target devices will be Raspberry Pis running node.js applications. How does one perform alpha testing while standing up such a service? Apparently by building a monster tower of 120 Raspberry Pi computers with Adafruit 2.8″ PiTFT displays. We’ve seen some big Raspberry Pi clusters before, but this one may take the cake. 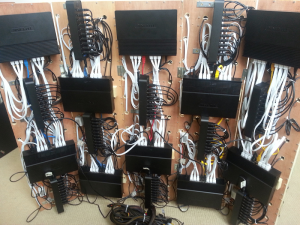 The tower is made up of 5 hinged sections of plywood. Each section contains 24 Pis, two Ethernet switches and two USB hubs. The 5 sections can be run on separate networks, or as a single 120 node monster cluster. When the sections are closed in, they form a pentagon-shaped tower that reminds us of the classic Cray-1 supercomputer.

Rasberry Pi machines are low power, at least when compared to a desktop PC. A standard Raspi consumes less than 2 watts, though we’re sure the Adafruit screen adds to the consumption. Even with the screens, a single 750 watt ATX supply powers the entire system.

[alexandros] and the resin.io team still have a lot of testing to do, but they’re looking for ideas on what to do with their cluster once they’re done pushing firmware to it. Interested? Check out their Reddit thread!