Thanks for another week of great entries in the Caption CERN Contest over at Hackaday.io! We still aren’t sure if our CERN staffer is looking at that machine pensively, amorously, or with a bit of confusion, but you all found some great words to go with the image!

The winner for this week is Stripeytype with the quote seen in the top image of this article. Stripeytype will be sporting a CRT head T-Shirt From The Hackaday Store at their next hackerspace meeting. 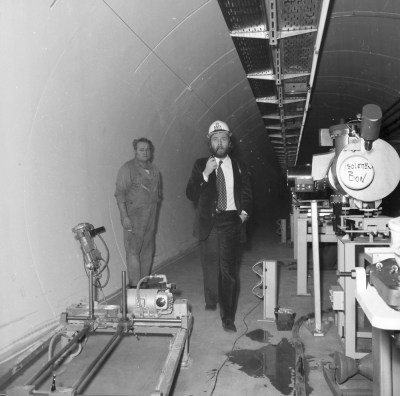 We’re not done searching out they mysteries of CERN’s history. Week 9 of the Caption CERN Contest has just begun!

Some of CERN’s experiments take place in the miles of tunnels below their labs in and around Meyrin, on the border of France and Switzerland. It looks like this image was taken in one of those tunnels. It’s definitely an interesting shot. CERN’s documentation for the image has been lost to history, so it’s up to you to explain what’s going on here! Add your humorous caption as a comment to the project log. Make sure you’re commenting on the log, not on the project itself. As always, if you actually have information about the image or the people in it, let CERN know on the original image discussion page.