What kind of impact does growing your own food have on the world’s resources? Jump aboard for a little thought exercise on this week’s Time for the Prize challenge to brainstorm urban gardening and living off the land.

We figure for any kind of meaningful impact there would need to be wide-spread adoption of people growing at least some of their own food locally. This means making the process fun and easy, a challenge well suited for 2015 Hackaday Prize entries. Write down your ideas as a project on Hackaday.io, tag it 2015HackadayPrize and you could win this week’s prizes which are listed below. 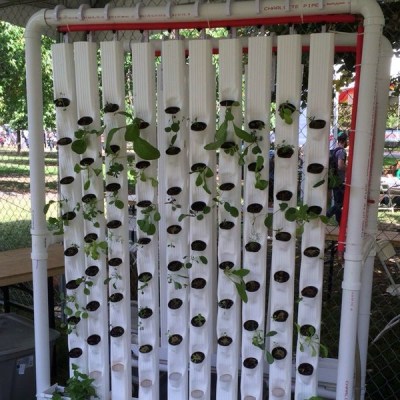 To get rolling, we started thinking about three things that are needed to convince people to grow their own food or live off the land.

First up, you need space to grow. This has been the subject of a number of urban farming hacks like the one seen here which uses downspouts as a vertical garden apparatus. Openings are cut into the front of the tubes, which are each hanging from a PVC rack. Each opening hosts a plant, holding them where they have access to sunlight, while taking up very little space on a sunny balcony or sidewalk.

The concept also includes a bit of automation. It’s a hydroponic garden and simple sensors and controllers handle the water circulation while providing feedback for the gardener through a smartphone app. We think the technology of the system is one way to attract people who would otherwise not take up seed and trowel.

For those new to taking care of plants the other thing to consider is information. Not only does the sensor network need to monitor the system, but something valuable needs to be done with the data. Perhaps someone has an idea for city-wide aggregate data which will look at successes from one urban garden and make suggestions to another?

This is your time to shine. Get those ideas flowing and post them as your entry for the Hackaday Prize. Even if you don’t see the build through the idea can still help someone else make the leap to greatness in their own brainstorming.

64 thoughts on “Time For The Prize: Urban Gardening And Living Off The Land”