For a while now [Florian] has wanted to itemize his water usage at home to keep better track of where his water bill is coming from — and to help him develop water conscious habits. He’s not done yet, but has had a pretty good start.

The problem with measuring the water usage of everything in your house is that the plumbing involved to install sensors is a rather big job — so instead he assumed constant flow in some places and just used sensors on the valves to determine how long the valve was open for, which gives him a fairly accurate number for water usage.

On the right is his kitchen faucet which features a super quick arcade button hack to keep track of it being on or off.

The toilet was a bit trickier. He ended up designing a 3D printed mount attached to the lever on the inside of the tank — it’s pretty universal so he’s included the .STL files on his website if anyone wants to try implementing this system.

All of these switches head back to a Raspberry Pi to keep track of the data in the cloud, which is where the fun begins. He was amazed at some of the numbers he ended up with — learning how much water it takes to wash lettuce for a salad, or even how much water is used giving your hands a quick rinse (about a 250ml!) to more unusual habits:

Also, the system is an excellent timekeeper of when I poop… and also everyone else that comes to visit. This is going to be fun. 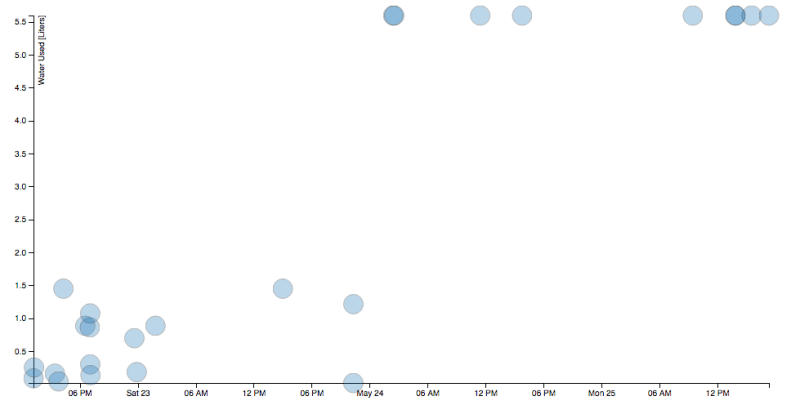 All this data collection also makes for a good point about where we’re headed:

I recently watched Ex Machina and there’s a scene that sticks out to me for summarizing the age we’re entering. The scene is of the AI’s creator describing his moment of insight when creating the first prototype. He explains that the data collected from people’s internet searches were not a map of WHAT people were looking at, they were a map of HOW people were looking at things. What’s interesting with all the data we’re collecting is what lies beneath its surface.

The more we start looking at what’s right in front of us, the better chance we have at making a positive difference in the world.