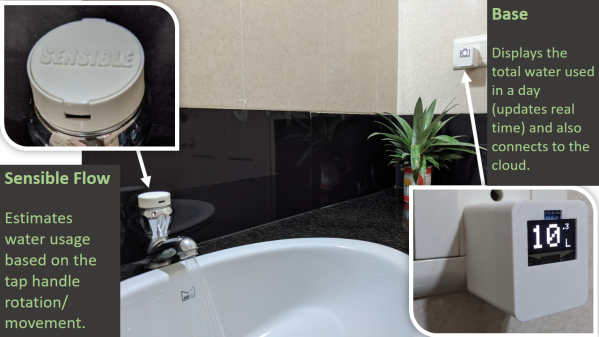 Safe, clean drinking water is a scarce resource that shouldn’t be wasted. But it’s not always easy to see how much you’re using when you turn on the tap: is it one liter a minute? Is it ten? How much do you actually use when washing your hands or brushing your teeth? If you’d like to get some hard data on your water usage, have a look at [Josh EJ]’s Sensible Flow project. It contains designs for a set of sensors that measure your water consumption and a convenient little display that shows the total amount consumed.

The most obvious way of measuring water consumption is to install an off-the-shelf flow meter onto your pipe, which is something that Sensible Flow supports. But probably the most interesting part of the project is a design for a non-invasive flow sensor that you can simply attach to any type of tap. This sensor contains a nine-axis inertial measurement unit (IMU) that detects how far you’ve twisted, turned or tilted the handle, and uses that information to estimate the amount of water flow. You will need to perform an initial calibration step using a timer and measuring cup, but you won’t have to rip open your plumbing just to keep track of your water usage.

Both types of sensors are powered by a coin cell battery that is estimated to work for about one year, thanks to a power-efficient Arduino Pro Mini and a BlueTooth Low Energy (BLE) module to communicate with the base station. The base station plugs into a wall socket and shows the total water consumption on a small one-inch OLED display. STL files for the enclosures are available on the project page, along with detailed circuit diagrams that show how all the parts are connected.

We’ve seen several water flow measurement systems for home use, such as this neat ESP8266-based shower water monitor. If you prefer just a simple visual reminder to turn off the tap, have a look at this LED gadget.

END_OF_DOCUMENT_TOKEN_TO_BE_REPLACED 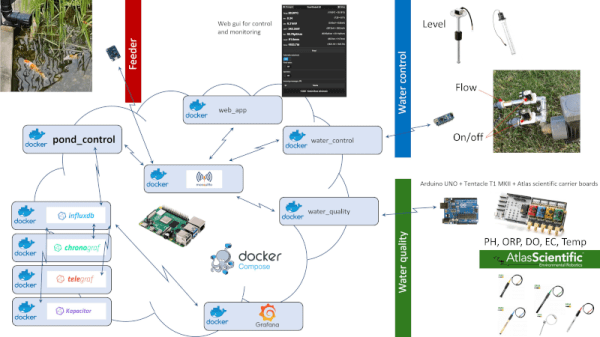 What do you think of when you hear the word pond? If you’re like most people, it conjures up images of a simple water-filled hole in the ground, maybe with a few fish added in for good measure. But not [Anders Johansson] — his pond is a technical marvel, utilizing more unique pieces of hardware and software than many of the more traditional projects that have graced these projects over the years.

In fact, this is one of those projects that is so grand in scope that any summary we publish here simply can’t do it justice. The aptly-named Poseidon project is built up of several modular components, ranging from an automated fish feeder to an array of sensors to monitor the condition of the water itself. How many other ponds can publish their current water level, pH, and oxygen saturation over MQTT?

[Anders] has provided schematics, 3D models, and source code for all the various systems built into the pond, but the documentation is where this project really shines. Each module has it’s own detailed write-up, which should provide you with more than enough guidance should you want to recreate or remix what he’s put together. Even if you use only one or two of the modules he’s put together, you’ll still be ahead of the game compared to the chumps who have to maintain their pond the old fashioned way.

In the past we’ve seen projects that tackled some of the individual elements [Anders] has developed, such as 3D printed fish feeders, but after searching through the archives we can’t find anything that’s even half as ambitious as Poseidon. At least, not for ponds. It reminds us more of a highly advanced aquaponics setup, and we wonder if that might not be a possible spin-off of the core project in the future.

Pools and hot tubs, although enjoyable, require monitoring and maintenance to keep the water clean and clear. [bhuebner] didn’t like having to constantly testing his hot tub’s vitals using test strips and water test kits. In an effort to autonomously monitor his hot tub’s water, he came up with a project he’s calling SpaSitter that records and tracks water quality indicators.

The hardware is based on a Nanode (think Arduino with on-board Ethernet). Three sensors are connected to the Nanode and placed in his hot tub’s water.  The sensors measure pH, ORP and Temperature. That data is then uploaded to xively.com where the data is not just stored, but tracked over time and displayed in graph-form. Checking the vitals on your phone can also get a bit tedious so [bhuebner] set up an email notification if one of the measured data streams go outside of a predetermined range. He still has to add chemicals manually and hopes to see some automation added to the next project revision.

[bhuebner] made his code available and also posted detailed instructions, including how to calibrate the sensors, for anyone wanting to do the same thing.

For a while now [Florian] has wanted to itemize his water usage at home to keep better track of where his water bill is coming from — and to help him develop water conscious habits. He’s not done yet, but has had a pretty good start.

The problem with measuring the water usage of everything in your house is that the plumbing involved to install sensors is a rather big job — so instead he assumed constant flow in some places and just used sensors on the valves to determine how long the valve was open for, which gives him a fairly accurate number for water usage.

On the right is his kitchen faucet which features a super quick arcade button hack to keep track of it being on or off.

The toilet was a bit trickier. He ended up designing a 3D printed mount attached to the lever on the inside of the tank — it’s pretty universal so he’s included the .STL files on his website if anyone wants to try implementing this system.