The Rigol DS1000 series of oscilloscopes are popular with hobbyists for good reason: they provide decent specs at a low price. However, their spectrum analysis abilities are lacking. While these scopes do have a Fast Fourier Transform (FFT) function, it’s limited and nearly useless for RF. 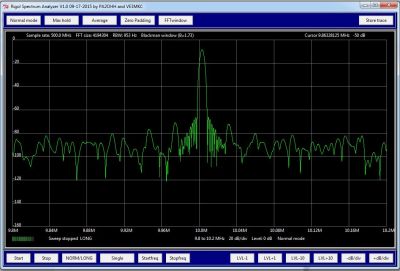 [Rich] wanted a spectrum analyzer for amateur radio purposes, but didn’t want to build his own sampling hardware for it. Instead, he wrote PyDSA, a software spectrum analyzer for Rigol DS1000 oscilloscopes. This tool uses the USB connection on the scope to fetch samples, and does the number crunching on a far more powerful PC. It’s able to plot a 16,000 point FFT at two sweeps per second when run on a decent computer.

PyDSA is a Python script that makes use of the Virtual Instrument Software Architecture (VISA) interface to control the scope and fetch the sample data. Fortunately there’s some Python libraries that take care of the protocol.

[Rich] is now able to use his scope to measure amateur radio signals, which makes a nice companion to his existing Teensy based SDR project. If you have a Rigol, you can grab the source on Github and try it out.

11 thoughts on “A Better Spectrum Analyzer For Your Rigol Scope”