I like to think that there are four different ways people use FPGAs:

I’d bet the majority of FPGA use falls into categories one and two. Some FPGAs even have CPUs already built-in. Even without an onboard CPU, you can usually put a CPU “core” (think reusable library) into the chip. Either way, you can always add other cores to create UARTs, USB, Ethernet, PWM, or whatever other I/O you happen to need. You either connect them to a CPU on the chip, or an external one. With today’s tools, you often pick what you want from a list and then your entire project becomes a software development effort.

The third style is doing full up logic design. You might use some cores, but you don’t have a CPU involved at all. You configure the FPGA to execute precisely the logic functions you need. Of course, if you are creating a custom CPU, you will sort of blend all of these styles together at different points in development. Other developers may build systems that include a CPU on the FPGA, some custom cores, and some full-blown logic development, so the lines can and do blur.

I’ll ignore the fourth style. It is great practice to do a traffic light state machine or an LED flasher in an FPGA. Practically, though, you could just as well use an Arduino or some other microcontroller to do that.

With the first two styles, the reason for using an FPGA is clear: those developers just want to mix and match prebuilt cores. Just like building things out of Lego bricks, it might not result in an optimal structure, but you can get a lot done with little effort. The downsides are mostly cost and often power consumption, depending on the device.

The reasons you use an FPGA to do “pure” logic design are the same reasons you develop using discrete logic in the first place.  FPGAs can implement very high-speed logic. Where a CPU has to execute a bunch of instructions to do things, the FPGA just has dedicated logic to do whatever you need, often in one clock cycle.

An FPGA’s ability to run at high speed and in parallel makes it an excellent choice for parallel processing and high-speed signal processing. There are a few other minor reasons designers sometimes use FPGAs, like the availability of radiation-hardened parts, but speed and parallelism are usually the drivers. 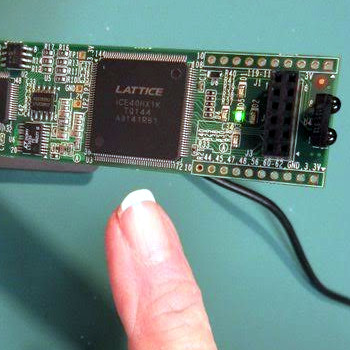 Earlier this year, I showed you how to build a simple project with an inexpensive Lattice iCEStick and open source tools. (The iCEStick appears to the right.) Since then, I have wanted to come back and do something more practical. This time, I’m going to take a UART core from GitHub and use it to talk to the PC via the USB port on the iCEStick. Then I’m going to build a custom PWM block from scratch and create a PC-driven PWM peripheral. Along the way, you’ll see some Verilog nuances like parameters and get some more hands-on experience with using existing cores and working with test benches. Later, we’ll add multiple PWM outputs quickly by creating more instances of the PWM block.

As much as I enjoy building everything from scratch, I also know I can grab some common building blocks to make things easier. Sometimes I reuse my own code, and there are other places to look, too, including:

In this case, I knew the iCEStick’s USB port could act as a serial port on the PC, and a quick search found this GitHub repository. The UART is a thin wrapper around an open source UART that resides on OpenCores.

I have my own UART code, so if it were not for the iCEStick-specific wrapper, I would have probably used it. However, it was too easy just to download the UART ready-to-go. There is one catch: the project includes the underlying open source UART as a subproject. If you download the ZIP file from GitHub, that subproject will be an empty folder that you’ll need to fill in separately. If you clone the project, you need to initialize the subproject like this: git submodule update --init

The project includes a simple test driver that echoes characters. It is always a good idea to make sure that borrowed code works before you start adding things to it, so the first task is to download the test project to the iCEStick and get it working. In fact, for this simple project, I’ll start with the test code as a skeleton for the finished design.

If you need a refresher on Ice Storm (the open source tools for the iCEStick), you can check out my earlier post. The repository has a Makefile that will let you simply run make to build the project. If you type make flash to the command line, the makefile will build the project if needed and program it to the FPGA. Be sure the FPGA is plugged into a USB port. 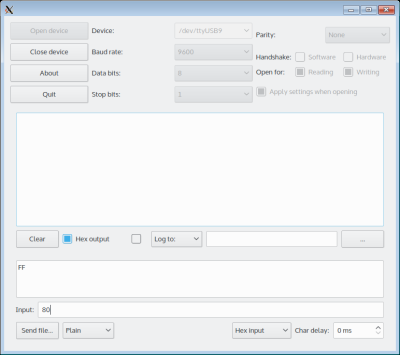 The FPGA will enumerate as a serial port — /dev/ttyUSBx under Linux. To talk to the FPGA, you’ll need to connect a terminal program to that port. For this step, any terminal program would be okay (e.g., minicom, picocom, or putty). However, when the PWM block is in place, you’ll want a terminal that can easily handle hex codes instead of ASCII characters. There are lots of choices, but I suggest Cutecom, which should be in your software repository (or download it from its homepage).

Once you have the port open at 9600 baud, you should be able to type characters in and see them come out. The uart_demo.v file produces the echo using an instantiation of the UART core:

There are lots of ways you could have written that, but I was going for clarity. In English, the right-hand side of the tx_byte assignment reads: If rx_byte is between 61 hex and 7a hex, inclusive, use rx_byte anded with 0xDF, otherwise just use rx_byte as-is. Change the code and flash the device again and verify that lowercase letters get converted to uppercase.

With the UART working, we can move to the heart of the project: a Pulse Width Modulation (PWM) generator. There are many ways to generate PWM. Imagine you are standing by a light switch in a dark room. If you turn the switch on, the room lights up, of course. If you turn the light on for 1 second and then off for 59 seconds, the total light in the room will be 1/60th of the amount of light when the switch is on. Now imagine you can switch the light very quickly. So out of, say, 60 milliseconds, you turn the light on for one millisecond. Your eye will average the light, and it will seem like the light is very dim.

What if you wanted the light to be 50% as bright as the full on light? You have a few choices. You could turn the light on for 30ms and then keep it off for 30ms. This is called “equal-area PWM.” However, you could also turn the light on for 1 ms and then off for 1 ms, yielding “proportional PWM”. Which way is best? That depends on what you want to do. For example, having 1 ms pulses will probably make any light flickering less obvious. However, using proportional PWM means the frequency of the pulses changes based on the duty cycle, which could cause buzzing in motors at some speeds.

I decided to create one block that can do either type of PWM. When you use the core, you’ll be able to pick which method you want it to use.

It is easy to generate PWM outputs by just driving a counter with the number of bits of resolution you need. For equal-area PWM, you can start with the output on when the counter is zero. When the counter reaches the duty cycle you want, flip the output off. For example, with an 8-bit counter, a roughly 50% duty cycle would be a count of 127. The output would be high on counts 0 to 127 and low from counts 128 to 255. You could trim the number of steps by resetting the count to zero early. For example, if you reset the counter at 200, then 50% would be 100, which is handy, if not necessary.

Proportional PWM is a little bit trickier but still easy. Sticking with an 8-bit resolution, the PWM generator can use an 8-bit counter with a carry output. On each clock cycle, you add the duty cycle value. That’s it. The output is the carry output of the counter. Consider a duty cycle of 0x80. Initially, the counter is at zero. On the first clock cycle, the counter will be 0x80, and since the carry output bit is zero, the output will be low. The next add results in a counter value of 0x00, but a carry occurs, so the output goes high. You can see this is going to repeat since the next cycle will be 0x80. That’s how the 50% duty cycle occurs.

If you work through the counter with a duty cycle of 1, you’ll see that there will be a large gap between high outputs. If you add 0xFF to the counter on each clock cycle, you will get almost constant high outputs.

I decided to create one block to do both styles. The Verilog interface looks like this:

I’ll talk more about the parameters in tomorrow’s post. The arguments include the standard clock (clk) and reset inputs. The remaining inputs are:

The outputs are epwm for the equal area output and ppwm for the proportional output. You would only use one per instance, of course.

Setting up the PWM block for proportional or equal area mode just requires setting the right parameters and picking off the correct output. However, to make it easier, I created two wrappers that only expose the arguments you need for each mode:

Unless you need something special, you’ll probably use the wrappers.

Although it is tempting just to try to load code into the FPGA for testing, unless it works the first time (yeah, right!) it is much more efficient to develop the system in a simulation. I use EDAPlayground to test the PWM code. To exercise it, I needed a testbench that is just a simple driver to use the block and generate some results you can compare to what you expect.

You can find the testbench and code on the EDAPlayground site, and you can run it there, too. Here’s what the testbench looks like:

The testbench isn’t hard to understand. It generates a clock and just wires up a few test devices, recording the results for a few thousand clock cycles. Here’s a partial run of the simulation:

You can match up the signal names on the left to the testbench code to see the PWM duty cycle for each trace.

This example is almost too simple, but it is also a lot to digest. Next time we’ll integrate the PWM and UART on real silicon, add some channels, and make the protocol a bit more sophisticated. Along the way, you’ll get to see how Verilog handles arrays and parameters. If you want a refresher on how to use EDAPlayground to do simulation, check out the videos from the last time I talked about the iCEStick, including the video below.

28 thoughts on “Taking The Pulse (Width Modulation) Of An FPGA”