In the beginning FPGAs and CPLDs really weren’t all that great. You need only to look at the GALs and PALs of the 1970s to find the origins of FPGAs – they were single chips with a few dozen logic gates that literally needed to be burned to be programmed. Programming a PAL meant cutting a few tiny wires inside the chip with electricity, and if you knew what you were doing, you could build a chip with any series of inputs and outputs you wanted, within reason.

According to Antti, the ‘golden age’ of FPGAs was sometime around 2007, with huge devices having thousands of cells. With these chips, you could build an HDMI transceiver, make a perfect silicon copy of old microprocessors, or just about anything else you could imagine. While these FPGAs were, and still are, amazing, most designs that included an FPGA also required a fast microprocessor. This led to the current generation of FPGAs, the System on Chip, such as the Xilinx Zynq. 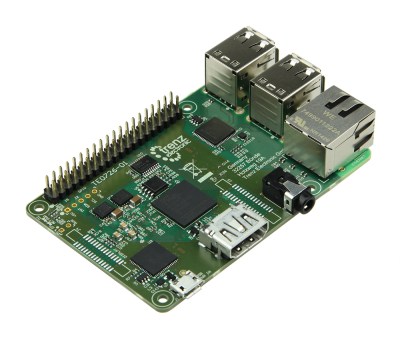 The Xilinx Zynq is an FPGA, but also tucked away in this bit of metal and epoxy is an ARM Cortex-A9 processor, interfaces for DDR2 and DDR3 memory, and peripherals that include USB and Ethernet. The problem is, what do you actually build with a device like this?

Antti has the answer to that question, and it comes in the form of a Raspberry Pi. He built the ZynqBerry, a device that doesn’t look much different from a Raspberry Pi 2. It has everything you would want – HDMI, Ethernet, and a quartet of USB ports, but this device is not built on a Broadcom System on Chip. It’s built on the Xilinx Zynq, and that means there’s an FPGA in the mix, ready to either emulate old chips, be an HDMI interface, or just there to offload computation from the ARM portion of the chip.

Right now, Antti’s ZynqBerry is the purest example of what FPGAs can do now. What does the future hold? These are devices that reconfigure on the fly. There’s a reason Intel bought Altera after all, and soon we’re going to CPUs and FPGAs combined on a single wafer that will be able to reconfigure themselves for the most powerful computing platform ever.

That’s still a few years down the line, and until then the most advanced FPGA will be the Xilinx Zynq. When the new devices come out, Antti will be busy doing what he always does: building interesting applications with FPGAs. Next time, though, it’ll be a supercomputer.

14 thoughts on “Antti Lukats: The Past, Present, And Future Of Programmable Logic”