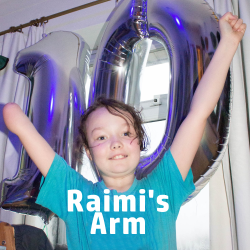 [Patrick] started by researching for existing designs and found some good ideas, custom builds and well documented open source projects out there. However, individual requirements shorten the list of what is applicable: Raimi also needs an extension for her partial forearm, and the design must be lightweight and compact enough for a kid. Because Raimi is growing rapidly, the design must be prepared to grow with her.

Eventually, [Patrick] decided to create his own design, incorporating some of the best ideas he found in the documentations of Enabling The Future and Open Bionics. He started with the design of a single finger, using servo-actuated tendons and return springs to actuate the finger within the space constraints of a children’s hand. A 3D-printed prototype confirmed the concept, and [Patrick] went on by designing a full hand and forearm. Squeezing the whole mechanical system into the tiny arm required the whole hand to be operated from only three servos. While the four fingers were tied to a single servo through a whiffletree system, the thumb additionally received a rotational joint, allowing for different grip styles. An Arduino controls the servos and displays the current grip-mode of the thumb on an OLED display. Later, myoelectric sensors shall be employed to give Raimi a natural interface to control her bionic arm.

You may be impressed by [Patrick Joyce’s]  design and build of a functional, miniaturized, mechatronic hand, but you will be certainly blown away to hear that he does all this using an eye-gaze system and a joystick. After 8 years of suffering from progressive MND/ALS, [Patrick] is quadriplegic with a small amount of movement left in his right arm and fingers. Still, even though he lost the ability to move his limbs, he has not lost the ability to move something in this world. Taking our own motoric abilities for granted, we may not realize how much our ability to manipulate the world around us forms our mind as well. A functional prosthesis can make a big difference to a young girl whose mind is still developing, deciding whether to accept the world as it is – or to change it for the better. Enjoy the video!