I first met [Pierce Nichols] at the paella dinner that caps Friday of Bay Area Maker Faire. He invited us to stop by his booth which he also mentioned was a bit out of the way. I looked for him on Saturday without success but bumped into him again at the Hackaday meetup that night. Finally Sunday we connected on my way out of the fair — they had stashed him outside in what I would categorize as the craft midway. It’s not hard to see why, who brings an 18′ kayak to their Maker Faire booth? 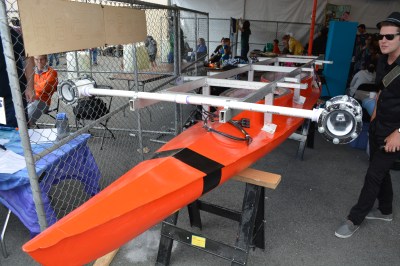 This used 2-person kayak is the main prototype for the autonomous boat project. Originally envisioned as a robotic craft that will circumnavigate the globe, the team have tempered their milestones to a set of incremental goals. Currently the kayak has electric propulsion which is driven by batteries. The proof of concept for solar power has been met (with a rack to hold the solar panels already in place) but the final wiring still needs to take place. Manual mode works rather well, with improvements planned as well as feature expansions to add autonomy through way-point navigation, and cameras-based obstacle avoidance.

When finally unleashed on the ocean, what will these floating robots accomplish? One vision is to include a mast high enough to mount cameras and sensors that increases viewing range. With this kind of coverage, a group of boats can canvass an area to collect research data, or as autonomous search vessels.

Steering fin for the wingsail

The dream of circumnavigation isn’t dead, just on a longer time-line. The group is working on a separate prototype on a small scale. This includes two large wing-shaped masts which serve as sails to propel what will also be an autonomous craft. These are known as self-tending wingsails because they have mechanism that aims the wing to propel the boat in the preferred direction. A solar-electric system is great when the sun is prevalent and overhead, but the further away from the equator the less you can expect from the sun. This makes navigating around the capes of Hope and Horn a windy proposition.

You can see it’s quite an ambitious project. It’s great to see that there is a lot of interest from people who help out, and that dedicated team members like [Pierce] are making the rounds to promote it. He’s based in Seattle and this interview was in the San Francisco area — quite a trek for the large prototype. This month he also took the prototype out to Toorcamp for a presentation.

If you’re not a boat builder you still may be able to help. The name Hackerboat is more of a project codeword than a name since the Hacker Boat Co. already exists and has been making Hacker-Craft since the early 20th Century. Do you have a catchy name for the project?

9 thoughts on “Building A Swarm Of Autonomous Ocean Boats”