MIT Media Lab and Microsoft have teamed up to take wearable devices one step further — they’ve glued the devices directly to the user’s skin. DuoSkin is a temporary tattoo created with gold leaf. Metallic “Flash” temporary fashion tattoos have become quite popular recently, so this builds on the trend. What the team has done is to use them to create user interfaces for wearable electronic devices. 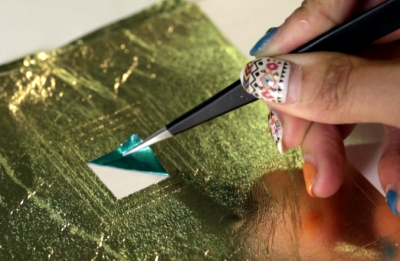 Generally speaking, gold leaf is incredibly fragile. In this process to yield the cleanest looking leaf the gold is not actually cut. Instead, the temporary tattoo film and backer are cut on a standard desktop vinyl cutter. The gold leaf is then applied to the entire film surface. The cut film/leaf can then be “weeded” — removing the unwanted portions of film which were isolated from the rest by the cutting process — to complete the temporary tattoo. The team tested this method and found that traces 4.5 mm or more thick were resilient enough to last the entire day on your skin.

The gold leaf tattoos make excellent capacitive touch sensors. The team was able to create sliders, buttons, and even 2 dimensional diamond grids. These controls were used to move a cursor on a computer or phone screen. They were even able to create a wearable NFC tag. The gold leaf is the antenna, and the NFC chip itself is mounted on the temporary tattoo backer.

These devices all look great, but with the exception of the NFC chip, we’re not seeing the electronics driving them. Capacitive touch sensors used as a UI for a phone will have to have a Bluetooth radio and a battery somewhere. We’re that’s all hidden under the arm of the user. You can see what we’re taking about in the video after the break. That said, the tools and materials are ubiquitous and easy to work with. Take a quick read through the white paper (PDF) and you can be making your own version of this today.