In the early 1920’s a company called the Hush-A-Phone Corporation started selling a simple device. It was more or less a cup that slipped over the mouthpiece of a phone temporarily. It made your conversation a little more private and also cut out some background noise from your calls. The device is pretty unassuming as technology goes (see picture to right).

By the late 1940s, the phone company decided that if people were attaching devices to their phones, the phone company would terminate their service. Keep in mind that the device didn’t make an electrical connection. It was just an empty box that fit over the telephone transmitter (or microphone, if you prefer).

Late in 1948, Hush-A-Phone protested with the FCC, but the FCC decided to open the case to public comment. By 1949, the company had sold about 125,000 devices. In 1955, the FCC decided that you could not attach a Hush-A-Phone to your phone because it might cause a deterioration in phone service (despite technical reports that the Hush-A-Phone did not impede phone operation).

Although the FCC’s decision was final, Hush-A-Phone appealed in court. Late in 1956, a Federal judge decided that it should be up to people how they want to use their phones as long as it didn’t affect the public. Particularly since a phone user could simply cup their hands around the phone for a similar effect. As a result, the sale of the device continued up to about 1972. You can see a video about the Hush-A-Phone from the American Museum of Radio and Electricity , below. 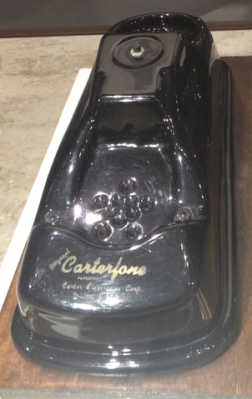 Tom Carter started selling the Carterfone in 1959–three years after the appeal court ruled for Hush-A-Phone. The device was simple by today’s standards (see photo on left). It was a way to acoustically couple a phone to a radio so that people on–for example, oil rigs–could talk to people on a regular phone.

Taking the phone company to court is a daunting prospect, but that’s what Carter did in 1965. Keep in mind this is about the same time companies are starting to use computers and there is a demand for modems. You could lease a line to use with a modem, but the phone company would not allow data on the voice network. Remember, one way to afford a very expensive computer was time sharing–allowing different users to share the computer and split the costs. However, having to lease lines between users drove up the cost even further. But everyone had phone lines.

By 1966, the FCC realized that it was vital to connect computers via the public phone system. They would hold a  public inquiry on the matter and used the Carterfone issue as a way to revisit the policy of not connecting anything to the phone system.

In 1968–following a seven-day hearing–the FCC required the phone company to allow devices to connect directly to the phone network as long as they did not cause harm to the system. Once the phone company filed a new tariff, Carterfone settled their 1.35 million dollar lawsuit for $375,000

Also in 1968, a company called Codex introduced the first 9600 baud modem. The 125-pound device had 66 PC boards and required tuning to work upon installation and any time the phone line changed. A pair of modems cost about $46,000 and required special cooling, like much of the gear in those days.

This still didn’t open the floodgate to third-party phones and devices. The phone company still required you to connect a “foreign” device (meaning one not from the phone company) via a Data Access Arrangement or DAA. The DAA prevents excessive signal levels on the line, protect against voltage surges, and perform other interface features. Guess where the only place you could lease a DAA was? The phone company.

This stood until 1976 when the FCC allowed private equipment to directly connect if it could pass certain FCC tests. Devices received a registration number to show they passed the test and this was the death knell for the DAA.

With an avenue to produce equipment that directly connected to the phone system, the market exploded with new products. Some were innovative like reliable answering machines and cordless phones. Others, like the phones that could send a still picture to a similar phone over the course of a few minutes, didn’t catch on.

By the way, the interface circuit is still called a DAA, but you don’t get them from the phone company anymore.

You may not even have a landline anymore. But if you do–or you just appreciate technical innovation–you can thank Tom Carter.