Skip to content
It started with one of those odd links that pop up from time to time on Hacker News: “The strange and now sadly abandoned Soviet Jet Train from the 1970s“. Pictures of a dilapidated railcar with a pair of jet engines in nacelles above its cab, forlorn in a rusty siding in the Russian winter. Reading a little further on the subject revealed a forgotten facet of the rivalry between Russians and Americans at the height of the Cold War, and became an engrossing trawl through Wikipedia entries, rail enthusiast websites, and YouTube videos.

Railroad speeds have been a subject of intense competition ever since Richard Trevithick first had a high-pressure steam engine mounted on a set of rail wheels to make a locomotive. Designers, railroad companies and national governments have duked it out over who has the quickest trains. Though the results often have little bearing on the everyday trains that shuttle commuters into work, it continues to be a source of fierce competition. At the time of writing this piece the fastest conventional train record is held by the French and the fastest in timetabled service is located in China, but it’s certain that engineers from multiple other countries have those records in their sights.

In the 1960s while French and Japanese engineers were busy making the fastest trains of the age using electric power from overhead wires, the president of an American railroad company had other ideas. The New York Central Railroad would create a train that would run at 200 mph, and it would do so using jet power. 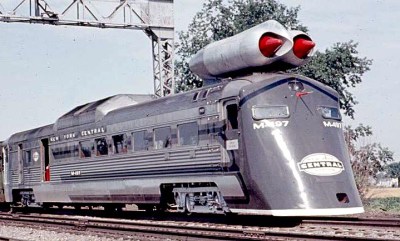 The engineer tasked with making this idea a reality was [Don Wetzel]. He took an existing diesel-powered railcar and mounted the booster nacelle from a Convair B36 bomber on a pylon above its cab, with its General Electric J47 engines providing the power. The Convair nacelle was mounted upside down, having previously been slung under the wing of the aircraft, so the engines had to be turned through 180 degrees within it. A streamlined front was fitted to the railcar, resulting in its being nicknamed the “Black Beetle“.

A 21-mile stretch of track was chosen between Butler, Indiana, and Stryker, Ohio, for its level grade and lack of corners. His top speed was 196 mph, but as he says in the first of the videos further down this page he was going easy on the throttle as the aim of the run was for 180 mph . If he had known that the world record at the time held by the French was a little over 200 mph, he might have opened it up a bit more. As it was his record still stands as the fastest achieved by a train carrying its own power source rather than taking its power from an overhead wire.

At the height of the Cold War, if one superpower did something then the other seemed bound to follow suit. A few years later in the early 1970s, the Russian railways also experimented with a jet-powered train (Google translation of a Russian Wikipedia original). Like the Black Beetle, they used an existing railcar modified with a streamlined front and a pair of jet engines above its cab, but unlike the American train they also streamlined the rear of the car. The engines were  Ivchenko AI-25 units as used in Yakovlev Yak-40 regional airliners. It achieved a 250 kmh speed on its test track between Dnipropetrovsk and Novomoskovsk in modern-day Ukraine.

Both the American and Soviet jet-powered trains were never intended as passenger-carrying transport, instead they served as engineering test beds to gather data about the effects of high-speed on both rolling stock and track. In that aim they succeeded, as the Russian engineer speaking in the second of the videos below testifies. What is remarkable is that neither train was built as a high-speed research vehicle from the ground up, both used run-of-the-mill low-speed railcars as their basis and ran on normal in-service track rather than specially prepared high-speed test tracks. Their operators should in both cases be remembered as particularly brave engineers, willing to risk a fatal rail crash in hardware pushed very far beyond the speeds it was designed for.

The Russian train survived until recently in the derelict state pictured in the page linked at the top of this page, but the American one had its jet engines and streamlining removed and was returned to regular service, eventually being scrapped in the early 1980s.

In the first video below the break courtesy of General Electric, [Wetzel] gives a fascinating personal account of the development of the Black Beetle, and of its record-breaking run. The second video of a Russia Today report mentions both trains, and has some film of the Russian train in operation.

Unsurprisingly, no jet-powered trains have been produced by our wider community of hackers and makers, so these are the first to feature on these pages. We have however featured more than one home-made jet engine.

29 thoughts on “Retrotechtacular: Railroads In The Jet Age”